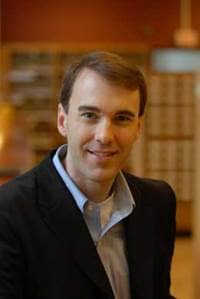 D. Michael Lindsay is a sociologist at Rice University who specializes in issues surrounding leadership, religion, and culture.  Lindsay conducted the nation's largest and most comprehensive study of public leaders who are people of faith, and publishedFaith in the Halls of Power: How Evangelicals Joined the American Elite.  He has also written numerous articles and won several prestigious academic prizes and fellowships.  He received his M.Div. from Princeton Theological Seminary and his Ph.D. from Princeton University.

He was interviewed by Timothy Dalrymple.

How, outside the evangelical community, is evangelical participation in American politics broadly perceived?

Most people clearly see evangelical political action as something that was mobilized by Ronald Reagan and came into its own with the election of George W. Bush.  There is good reason for that to be the perception, although in some ways I think it overstates the role of Reagan.  Most ordinary evangelicals actually voted for Carter and not for Reagan, but the evangelical movement's leaders were very supportive of Reagan.  And Reagan was very smart at using symbolism to gain evangelical favor.  George W. Bush did much the same.

The close identification of evangelicals with conservative politics is shaped in large part by particular personalities, such as George W. Bush, James Dobson, Gary Bauer, and the like.  That does represent a significant element of the evangelical community.  But we've seen a change in recent years.  I would say that the 2008 election was the first time that evangelicals as a religious constituency were actually welcomed into the campaign process for a Democratic candidate.  Although Jimmy Carter was an evangelical, he was surrounded by people who didn't share his religious bearings.

What do non-evangelicals perceive to be the core concerns that motivate evangelical engagement in the political sphere?

I would say that evangelical political action is seen as a politics of protest, specifically protesting Roe v. Wade.  So abortion is front and center.  And protesting what religious conservatives feel has been the encroachment on traditional families values, whether by Hollywood or by a mobilized gay community, or so on.  Those two issues have really galvanized the evangelical community.  By and large, evangelicals are known more for what they are against than what they are for.

Some have criticized the evangelical community for caring about abortion and gay marriage to the exclusion of other issues, such as poverty.  Yet evangelicals are commonly involved in serving the poor.  How did this perception arise?  Why are evangelicals perceived not to care about the poor?

Many evangelicals do not see government as the primary mechanism by which care for the poor ought to be delivered.  Empirically that's ridiculous, because far more aid goes to the poor and needy through government than through churches and other entities, just because there is a greater infrastructure for it.  Yet I would say that care for the poor is not often identified as a policy issue for the evangelical community in part because of where it fits in the political landscape broadly.

Evangelicals in Great Britain are more known as political progressives.  And part of what drives their message is care for the poor, especially on the international front.  But American evangelicals have traditionally not favored large government initiatives to support the down-and-out.  Maybe that has changed a little since the Great Society reforms of the LBJ years, but I still think that this rugged individualism is woven into the American ethos -- and evangelicals, they don't just buy it, they promulgate it.  American individualism is very deeply centered in American evangelical theology.

I think it is wrong.  Evangelicals are far from being a monolith.  There is much greater pragmatism in the evangelical community than is commonly realized.  Really, even those people who study evangelicalism see the conservative wing as monolithic, but my research shows that it is so fragmented.  It's about building little fiefdoms.  James Dobson, for instance, doesn't really work with other organizations, partly due to the needs of building donor bases and partly because it's difficult and complicated to bring all of these things together.  For good or for ill, American evangelicalism is dominated by particular personalities, and those personalities don't always work well together.