Is America a Christian Nation 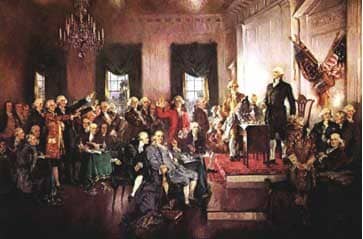 Americans love their history, but seldom think historically. The problem is not that they don't pay enough attention to history. Americans spend millions each year on heritage vacations and history books. Politicians and pundits use history to justify their views.

The problem is a common propensity to mangle the past to suit current needs, a sort of indoctrination by historical example. Too many believe that the study of distant societies and events is worthless unless it is somehow useful to prove a current point.

So what do they do when the past disappoints? Or when historians tell them something in the past that doesn't conform to the way they view the world? Ideally, when this happens they should follow the evidence and do their best to tell stories that reflect the past in all its complexity. But this is hard to do.

Consider the current debate over the relationship between Christianity and the founding of the United States. Over the last two years I've given several public lectures that tried to answer the question of whether the United States was founded as a Christian nation. I never know how my audiences will respond to my presentation, especially since I am a Christian who teaches at a church-related college. But I'm sure that most are more interested in having their answer to this question confirmed by historical data than in being confronted with a past that they find uncomfortable.

Those who insist that America was founded as a Christian nation run roughshod over the historical record. They use the words of the Founding Fathers to support Republican jeremiads on the moral decay of American life. If only this country could return to its Christian roots, they say nostalgically, everything would be okay.

And how do they demonstrate that America was founded as a Christian nation? By selectively choosing texts from the writings of the Founders without any effort to explore them in the context of the 18th-century world in which they were written. Just because John Adams and George Washington quoted from the Bible or made reference to God does not mean that they were trying to construct a Christian nation. Granted, the Founding Fathers were the products of a Christian culture, but most of them were never comfortable with the beliefs that defined this culture. Very few of them would qualify for membership in today's evangelical churches.

Even so, the leaders of the Christian Right have demonstrated that they can find a useable past in the words of the Founders. A recent survey by Vanderbilt University's First Amendment Center found that 74 percent of Republicans and 50 percent of Democrats believe that the U.S. Constitution established a Christian nation. Jerry Falwell and D. James Kennedy, recently deceased evangelical leaders who led in promoting the idea that America is a Christian nation, did their work well.

But before we go too far in condemning the Christian Right on this front, let's remember that the secular left is not immune to errors of historical thinking. While evangelicals misinterpret the references to God in the words of the Founding Fathers, their critics simply have no idea what to make of those same quotations. Since they can't fathom why people today would make religious faith an essential part of their everyday lives, they have little interest in making sense of past worlds where such beliefs were important.

Such approaches to history seldom enable us to better understand the past. Thinking historically does not mean that people cannot learn from the past -- they should and must. But they should be careful how they use historical examples. Exploring the past requires a concern for what it was really like.

The past is like a foreign country. Those who enter it as guests should try to understand its foreignness in a way that respects our dead ancestors who inhabit it. We must not invade the past with the goal of remaking it into our own image.

The past may not always be useful when we want to invoke it. But only when we confront it head-on, without preconceived agendas, will we be able to learn from it and let it transform us. This is the lesson that both the Christian Right and some of its secular opponents need to take to heart.

Mr. Fea teaches American history at Messiah College in Grantham, Pennsylvania, and is a writer for the History News Service. This article was first published on the History News Network and is reprinted with permission.