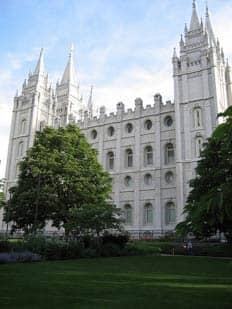 The Articles of Faith underscore the deep and fundamental role that knowledge plays in the teachings of The Church of Jesus Christ of Latter-day Saints: "If there is anything virtuous, lovely, or of good report or praiseworthy, we seek after these things" (A of F 13). Speaking of the LDS commitment to learning and education, M. Lynn Bennion wrote: "It is doubtful if there is an organization in existence that more completely directs the educational development of its people than does the Mormon Church. The educational program of the Church today is a consistent expansion of the theories promulgated by its founders" (Bennion, p. 2).

The educational ideas and practices of the Church grew directly out of certain revelations received by Joseph Smith that emphasize the eternal nature of knowledge and the vital role learning plays in the spiritual, moral, and intellectual development of mankind. For example: "It is impossible for a man to be saved in ignorance" (D&C 131:6) of his eternal nature and role. "The glory of God is intelligence, or, in other words, light and truth" (D&C 93:36). "Whatever principle of intelligence we attain unto in this life, it will rise with us in the resurrection. And if a person gains more knowledge and intelligence in this life through his diligence and obedience than another, he will have so much the advantage in the world to come" (D&C 130:18-19). "Knowledge saves a man, and in the world of spirits a man cannot be exalted but by knowledge" (TPJS, p. 357).

An often-quoted statement from the Book of Mormon reads: "To be learned is good if they hearken unto the counsels of God" (2 Ne. 9:29). In June 1831 Joseph Smith received a revelation concerning "selecting and writing books for schools in this church" (D&C 55:4), and another on December 27, 1832, establishing the broad missions of education in the Church: And I give unto you a commandment that you shall teach one another the doctrine of the kingdom. Teach ye diligently and my grace shall attend you, that you may be instructed more perfectly in theory, in principle, in doctrine, in the law of the gospel, in all things that pertain unto the kingdom of God, that are expedient for you to understand; of things both in heaven and in the earth, and under the earth; things which have been, things which are, things which must shortly come to pass; things which are at home, things which are abroad; the wars and the perplexities of the nations, and the judgments which are on the land; and a knowledge also of countries and of kingdoms-that ye may be prepared in all things [D&C 88:77-80].

The Church has been built on the conviction that eternal progress depends upon righteous living and growth in knowledge, religious and secular. "Indeed, the necessity of learning is probably the most frequently-repeated theme of modern-day revelations" (L. Arrington, "The Founding of the L.D.S. Institutes of Religion," Dialogue 2 [Summer 1967]:137).

Joseph Smith and many of the early Mormon pioneers came from a New England Puritan background, with its reverence for knowledge and learning (Salisbury, p. 258). The LDS outlook assumes the perfectibility of man and his ability to progress to ever-higher moral, spiritual, and intellectual levels. In this philosophy, moreover, knowledge of every kind is useful in man's attempt to realize himself in this world and the next. "It is the application of knowledge for the spiritual welfare of man that constitutes the Mormon ideal of education" (Bennion, p. 125). The early leaders of the Church, therefore, saw little ultimate division between correct secular and religious learning. Broad in scope and spiritual in intent, LDS educational philosophy tends to fuse the secular with the religious because, in the LDS context, the two are part of one seamless web (Bennion, pp. 120-23).

In 1833, Joseph Smith founded the Church's first educational effort, the School of the Prophets, in Kirtland, Ohio. That school was devoted to the study of history, political science, languages (including Hebrew), literature, and theology. Its main purpose was to prepare Church leaders to magnify their callings as missionaries to warn all people and testify of the gospel (D&C 88:80-81). It also set an example of adult learning that was followed "in Missouri, Illinois, and Utah, where parents joined their children in the pursuit of knowledge" (Bennion, p. 10).

In 1840, Joseph Smith sought the incorporation of the City of Nauvoo, Illinois, and along with it authority to establish a university. The Nauvoo charter included authority to "establish and organize an institution of learning within the limits of the city, for the teaching of the arts, sciences and learned professions, to be called the "University of the City of Nauvoo"' (quoted in Salisbury, p. 269).