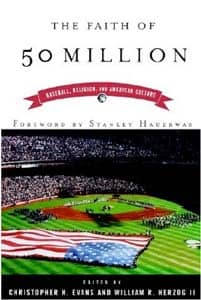 I was the best player on the worst teams and the worst player on the best ones, at least those I was able to make. While this leaves a lot of teams in between, it nevertheless suggests the ambiguity of my relationship to baseball, a tie I never expect to understand fully and never expect to get over. You see, I love the game. I played baseball and then softball for forty-six seasons, from the time I was ten through my ﬁfty-ﬁfth year. It has a grip on my life that I regard as amazingly constructive and yet it may be as destructive as anything I ever loved.

In 1945 when I ﬁrst began to play baseball, it was just something we did because football was out of season. My ﬁrst love was football, and I had dreams of becoming Johnny Lujack, the great quarterback of the Notre Dame football team. It would be much later before I was told that Notre Dame was a "Cath'lik college" and that "we" didn't go to those kinds of schools, only one of a growing list of my disappointments in athletics. Still, when I went out for the high school football team in the eighth grade, I was too embarrassed to tell them I wanted to be a quarterback, so I went out for linebacker instead, a position for which I was equally inept. Within a month I was having terrible pains in my lower back. When I went to the bone doctor, he told me I had spondylolystheses-or something like that-which meant I had a vertebrae congenitally out of place and that I had to "quit football, have an operation," and "become a semi-invalid the rest of my life." He put a brace on my back to wear "until summer when you are out of school and can have the operation." I asked him what would happen if I did not have the operation, and he told me I would one day step off a curb and be paralyzed for the rest of my life. Well, I never had the operation, and I never was paralyzed either. Long before Foucault I learned that the sciences, and especially medicine, were inexact disciplines and operated in a regime of knowing that was not universally true or without error.

That ﬁrst summer with the back brace I began to sneak out to play baseball. I "knew" baseball wouldn't hurt me, and it never did, at least not that way. I discovered that I played well with my friends. I had an arm, I could hit, and while I couldn't run fast, I could catch almost anything I could touch. In that "universe" I was a baseball player.

All of the passion I had poured into football suddenly found expression in baseball. The entire walls of my room were covered with pictures of the Yankees. My great hero was Lou Gehrig, not Babe Ruth. Somehow I connected my spondylolystheses with his amyotrophic lateral sclerosis. In my boyhood fantasies I fought as brave a ﬁght as he, but I envisioned myself coming to bat in the World Series and hitting the winning home run only to have my back come apart in that instant and to live from then on in paralysis. The fantasy was wonderful because I could have all the acclaim of such heroics without having to live as a paraplegic.

I remember, too, that there was something about that Sears Roebuck authentic "Ted Williams glove." The leather molded to my hand, and I had the "best pocket" of any kid in town. I still remember that ﬁrst year throwing a ball back and forth in the parking lot behind the 13 Taxi Company-a twelve-foot-square concrete block building that served as the command center for a ﬂeet of four cars of which my Dad was "owner and operator." Though I had no words for such things I do remember a kind of spell that came over me as I caught and then threw back that ball. It was a mesmerizing experience. I never lost my love of "warming up," and that ritualized liturgy of tossing a baseball with another player even yet has more power for me than any range of practices promoted by the increasing array of gurus both Christian and otherwise who ﬂock around middle-class life. Watching the arc of the ball move through the air and folding itself into the swallowing wrap of the glove of my coreligionist, or seeing it come toward me in that geometric curve through space, that beautiful loft, and the feel of something so precisely smack into the socket of your own grasp. I never cease to be struck that something could so move through space and come to rest at a place of such "perfect" ﬁt. Indeed, life hardly ever seems so complete as that except in sexual love and mystical experience.

So my love of baseball came on the rebound. As composed as such a love is of hurt and hope, it is nonetheless a powerful passion. From then on I worked out at baseball all year round. Anytime I could ﬁnd anyone who would play pitch and catch or hit ﬂy balls or get together enough people for batting practice, I did it. I threw balls at the cabstand wall so I could "practice" picking up grounders on the sidewalk in front. This was one more case where an extraordinary amount of practice was wasted. Throughout all my playing days the only place I was effective in picking up ground balls was in the outﬁeld, never at shortstop.