The college years mark the transition into adulthood not only in body and mind, but also in spirit.  My faith, like every other part of me, had to develop, mature, and become my own.  While at first it may have appeared as though I were losing my faith, in fact I was gaining faith in a deeper way for the first time. 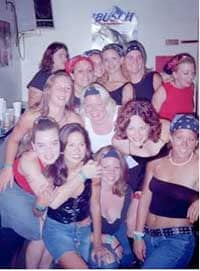 One comes to college with a certain inheritance of parental rules, values and beliefs -- and promptly throws them out the window.  Suddenly brownies are a perfectly suitable breakfast food, and Twinkies and Sour Patch Kids form a respectable two-course dinner.  Four a.m. is an early bedtime, and classes before noon might as well not even be listed in the course catalogue.  I was free to hang out with the nice boys, the bad boys, the bad girls.  And I no longer had to go to synagogue on Friday nights and Saturday mornings!

I was liberated and thrilled -- for about two weeks, until I realized that my body could not survive on caffeine and candy.  Nor could my soul be nourished if I did nothing to feed it.  Suddenly my parents' rules seemed less oppressive than life-giving, less restrictive than restorative.

I looked for a synagogue for Rosh Hashanah and Yom Kippur services.  I found a synagogue, but the services felt awkward and uncomfortable.  After 18 years at synagogues where my father was the rabbi, and the services reflected the values and beliefs with which I was raised, anything else just felt odd.  Turned off, I didn't return.  Thus I passed the first Yom Kippur in my life in which I did not set foot inside a synagogue.

My faith was still important to me, and I knew I could worship without the benefit of a building.  But I missed the community of the synagogue.  In my stumbling to find a reason to go to synagogue regularly, I asked around and discovered that a good handful of my new college friends were Jewish but none was interested in any level of observance.

Yet I kept searching for a community of faith, since some part of me felt empty without it.  As my Christian friends like to say, I was raised up within and by my many Jewish communities.  These communities, as well as my parents, grandparents, and extended family, cared for me, loved me, listened to my stories, and helped instill in me the importance of a Jewish community in my life.

For the four years of my college life, my Jewish observance varied greatly but the need was always there.  The deep yearning for community never went away.  Prior to college, Judaism was easy.  It was the easy and obvious choice.  My mother kept a kosher home; my father was my rabbi.  It was a foregone conclusion that I would have a bat mitzvah and go to Sunday school.  But when I was thrust into another world, a world outside of the community my parents built, I had to find my own way.  I had to choose to have separate pots and pans in my apartment kitchen, to buy kosher food, to keep the Sabbath.

I finally found a meaningful faith community when I came home from college during my first winter break.  Since my father no longer had a synagogue of his own, they had started attending the local Chabad (Orthodox, Hassidic) shul.  This was a shock to my system since I had been raised in the Reform movement. Vehemently opposed though I was, I went, broadcasting my reluctance not only through my attitude but also through my dress.

However, it was a turning point in my Jewish life.  Instead of davvening, I read the books the rebbitzin had on the shelf.  I almost learned more about Judaism in that two-hour service that I had in my entire Reform Jewish educational career.  The next time I went, I just watched the people praying.  I learned a new way to Jew.  When I went back to school, I sought out my local Chabad.  The beauty of this particular group is that there are shuls in nearly every town and the structure is similar. If I learn how to davven in Boulder, I can do it in Jacksonville.  And the community stretches all over the world.

Thus, by my senior year, I had become a fixture at the local Chabad synagogue.  I worked hard to jumpstart the Hillel on my campus, and led a Friday Torah study with whoever showed up (mostly Christians, but that led to lively debates).  I had created my own identity in this community.  I was no longer  "the daughter of Rabbi and Mrs. Davis," but I was a member of the Jewish community in my own right.