Football and a Missionary Focus 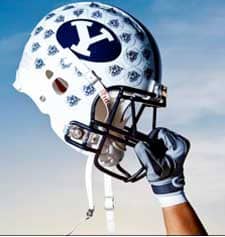 With the dawn of another much-anticipated season of college football nearly upon us, I've been thinking about a series of conversations I had this past year with a friend regarding the allocation of resources at BYU. This friend was bothered by the fact that the BYU football program has received such a tremendous amount attention and financial support from the alumni and administration while what he saw as more deserving schools and programs within the university went underfunded.

The standard answer to such concerns seems to be that the football program is shown preference because it serves as an important missionary tool for the LDS Church (and the school). Some might also point to revenue realized from the football program, but given every program at BYU is supposed to contribute to "the balanced development of the total person," revenue alone doesn't quite seem to justify such a large investiture of energy and resources. So I'm curious what others think. Is the BYU football program an effective missionary tool? And, if so, to whom exactly and in what way?

I think the program clearly serves a spiritual mission to the Latter-day Saint players who participate in it. One of BYU's stated educational goals is to teach students "the truths of the gospel of Jesus Christ." While BYU occasionally hires non-member assistant coaches, its head coach and the majority of its staff are Latter-day Saints, and guiding these athletes in their spiritual as well as their physical development seems to have long been one of the focuses of coaching at BYU.

The same can be said for the non-Latter-day Saint players participating in the program, who will have extended exposure to the Church, its members, and its teachings during their time at BYU.

A friend of mine who played on the BYU basketball team several years ago actually told me once of an orientation she attended for all incoming athletes. The athletic director at the time, Val Christensen, told the athletes that one of the purposes of BYU's athletic programs was to bring the Latter-day Saint athletes closer to Christ, while also noting that if the non-member athletes didn't take the opportunity to learn something about the LDS Church and its members during their time at BYU then "shame on them" (he likened this to athletes spending several years in Israel among the Jews and learning nothing about Judaism).

To bolster this point, one could cite to a veritable ocean of former BYU players, both member and non-member, who might exemplify the spiritual benefits that can result from participating in the BYU football program (including, for example, Ty Detmer, who joined the Church during his stay). One can also argue that the revenues realized from the BYU football program help to subsidize BYU's participation in other collegiate sports and that the athletes participating in those programs are, as a direct result, themselves able to enjoy the spiritual benefits of being an athlete at BYU.

The more difficult question, in my mind (and I say this as an avid BYU football fan), is whether the BYU football program actually serves as an effective missionary tool to the broader college football audience, which seems to really be the core of the arguments that some make to justify the energy and resources that are put into the football program. And, as a corollary to that question, does BYU's program have to be top tier in order to accomplish this end?

To me it is far from clear whether the BYU football program leads to, say, more convert baptisms (and I'm not really sure of how this could be feasibly gauged). I'll acknowledge that the program may well create good feeling toward the Church among some, but having a prominent football program at a university known for its religious scruples can actually present some serious challenges that can undermine the program as an emissary for both the Church and the school. (See examples of these in these articles from USA Today, ESPN, Daily Herald, Deseret News, and more.) When situations like this arise, some of them extremely serious, the news is often widely disseminated to the disadvantage of everyone associated with university.