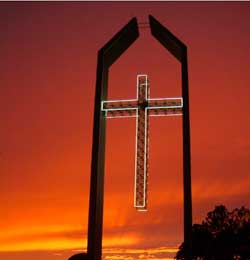 Taken as a whole, only two percent of Asia is Christian. Yet half the people in South Korea profess Christ.  Yoido Full Gospel Church in Seoul, which seats 25,000 worshipers at a time, is among the world's largest congregations.

Introduced to the gospel by missionaries, Koreans now work as missionaries in 164 countries. Only the United States sends out more missionaries than Korea does.  Korean-speaking pastors in the U.S. are especially zealous, with the result that 75 percent of Korean Americans attend Protestant churches, and some of the remaining 25 percent are Catholic.

By affiliating with North American denominations -- including Methodists, Southern Baptists, and Presbyterians -- Korean American churches have boosted denominational rolls.  The first Korean congregation in the Christian Reformed Church in North America (CRC) began in 1977 in Los Angeles.  Now the CRC has 60 Korean congregations, and Korean Americans are the CRC's second-largest ethnic group.

No matter what denomination they join, Korean American churches and Christians bless fellow worshipers with their passion for prayer, discipleship, and outreach.  Yet Korean pastors in North America say that too many in the second generation are leaving the church.  These leaders pray that worship renewal and re-assessing cultural heritage will make the difference in whether children and grandchildren accept their parents' faith.

In the late 1700s, missionary priests rejoiced over the first convert from Korea.  Protestant missionaries arrived a century later.  Horace Underwood, the first Presbyterian missionary to Korea, described his first decade of work there as "like a fairy tale" or a "chapter from the Acts of the Apostles."  The contrast between conversions in Korea, as compared to elsewhere in Asia, such as Japan, astonished the world.  The 1913 Reformed Missionary Conference called it "a great wonder in our century."

Certainly prayer helped fuel this growth. Gathering for early morning prayer has been a constant among Korean Christians ever since the Great Revival of 1907, also known as the Korean Pentecost.  Today, in Korea, Australia, Canada, the United States, and probably wherever Korean Christians live, believers still gather around dawn to pray.

At Calvin Theological Seminary in Grand Rapids, Michigan, Korean students get together at 6 a.m. on weekdays and 7 a.m. on Saturdays. Many also attend dawn prayer meetings on Sundays at their churches before church school and Sunday worship.

Men and women filter in, some yawning and rubbing their eyes. They choose seats scattered throughout the seminary auditorium. Every three days a different seminarian leads a song and responsive Bible reading and preaches a substantial sermon, all in Korean.  Then someone turns on a worship music CD, turns off the lights, and non-Korean visitors suddenly understand why everyone has been sitting so far apart from each other.

Everybody prays out loud at once.  Some kneel.  Others rock in their seats.  They whisper, speak, groan, weep, sing, pour out their joys and sorrows to God.  People leave as they choose, but some pray for half an hour or more.

"Korean Christians normally cry and moan for prayer time.  Some friends have serious problems of finance and health.  So they pray God for solving the problem," explains Kyung Min An, a masters of theology student who also heads the seminary's Korean student association and is assistant pastor at Korean Grace CRC.

Praying out loud at once, sometimes called a "concert of prayer," is common among Korean Christians.  Church members often agree to meet each morning for a month to pray about a specific goal, such as affording a new church building.  Many worship services include a shorter concert of prayer.

There's another reason for Korean conversions, too, according to many experts.  Along with accepting the faith of Western missionaries, many Koreans accepted the missionaries' conflation of Christianity with western culture.  After World War II, and especially since South Korea has entered the global marketplace, conversions have accelerated.

"Korean Christians became importers and admirers of the Western culture and led a long process of westernization, which has contributed to making Korea a modern industrial country but also to secularizing it in many ways.  Thus, the western materialism and individualism of technological culture have secularized Korean mind as well as Korean church," Jung Suck Rhee says in his dissertation, Secularization and Sanctification.  A former pastor, Rhee teaches systematic theology and Korean ecclesiology at Fuller Theological Seminary.