Nobody Knows ... at the Movies 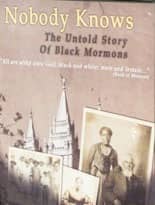 Five years in the making, Nobody Knows: The Untold Story of Black Mormons is the culmination of efforts from many faithful Latter-day Saints of all races (including Darius Gray and Bloggernacle contributor Margaret Blair Young) who have worked to educate members and non-members alike about the untold and forgotten stories of black Saints throughout history.  Nobody Knows can be seen through a handful of select screenings around the country, and the DVD is available for purchase through the official site.

[Note: Nobody Knows isn't a film that lends itself to a "grade" as I normally do for articles about LDS films.  The documentary is recommended for all discerning viewers.]

Ask the average white LDS Church member off the street about the history of blacks in the Church and the answer is often very simple:  Blacks were not eligible for ordination to the priesthood until 1978, and then they were.  Nothing personal, just God's will - no different in principle than only the Levite tribe of Israel having the priesthood in Old Testament times, or the early apostles in the New Testament being forbidden for a time from sharing the gospel with the Gentiles.

Naturally, the truth is more complicated.  As Nobody Knows shows, there were black priesthood holders in the early years of the Church before the Civil War, and their existence raises a number of key questions:  if the ban wasn't in place from the very beginning, how did it start and why?  Was it really God's will after all, and if not, why did it take so long to change?

In practice, the "nothing personal" part is hard to support as well, with the ban itself spawning a variety of folklore and speculative doctrine to explain its existence, which basically said blacks were under a curse for a variety of reasons, and were generally spiritually inferior.   How did such folklore start, why was it widely accepted, and why has it also taken so long to overcome, even thirty years after the 1978 revelation?

Half of Nobody Knows takes the viewer through the key historical events in black LDS history starting from the first known black priesthood holder (Elijah Abel, ordained in 1836) through modern times.   At 73 minutes, though, Nobody Knows doesn't really have the time to do a complete and comprehensive history of black Saints, and ends up just hitting a few of the high points before moving on to the next segment.  (The DVD contains 100 minutes of additional material that fleshes out some of the other details.)

The other half of the documentary consists of interviews with present-day African-Americans (LDS and non-) about how the ban and its related folklore affected them and their families.   These personal testimonies and experiences of black members, old and young, serve as the best part of the film.  Many testify of their personal struggles in holding on to a testimony and staying active, while trying to change the minds and hearts of others.   ("I didn't mind having to defend my church to blacks," says one, "but I did mind having to defend my blackness to Church members.")

Nobody Knows isn't an ‘agenda' film, though.  It wants to be a positive experience and a positive influence to viewers, even as it discusses some negative issues.  The black members interviewed in the film are universally full of optimism and happiness about having the gospel in their lives, even when you can still sense an (understandable) undercurrent of bitterness beneath the surface.   It's hard to hold a negative impression of anything when the documentary finally ends, after hearing such positive statements of faith and perseverance from many of these patient members as they explain their trials and experiences.

Nobody Knows also tries hard to be positive toward the Church and past Church leaders (at least, as much as possible under the circumstances).  While a few quotes from previous Church presidents are shared related to blacks and the priesthood, many of the most offensive quotes from 19th (and 20th) century Church leaders are skipped.  There's also no discussion at all about interracial marriage, which was also a heated discussion point in previous generations relating to Church policy.  The film sets the stage at the beginning for the fallibility of Church leaders (and from the beginning implicitly assumes that the ban was merely a result of fallible leaders), but isn't a heated attack on the Church by any means.  The black members featured in the film address the fallibility issue obliquely, seeming mostly to have made peace with the past themselves and moved on.