Of Sacred Groves and Tree Huggers 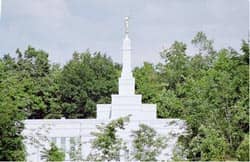 From the Tree of Life to the Sacred Grove (as LDS often refer to the grove where the Father and Son appeared to Joseph Smith) to columns in a cathedral to a walnut tree in the Conference Center, trees and groves play a significant role in LDS religious life and worship. Some take this significance too far and worship the very objects created by God. These people are often called ‘tree huggers,' used in a derogatory sense by religious people toward others perceived of as worshipping nature. On the other hand, others will seek to destroy that which is sacred to others where critical beliefs may differ. Latter-day Saints teachings and practices sit somewhere in the middle of these two extremes, recognizing that trees are a means to an end -- a vertical axis that links heaven and earth -- and that trees, as creations of God, can lead us closer to Him.

"Trees have played an important role in many of the world's mythologies and religions, and have been given deep and sacred meanings throughout the ages." "Pliny the Elder (A.D. 23-79) indicated that trees were the first temples of the gods." Additionally, "sacred groves were a feature of the mythological landscape and the cult practice of Old Europe, of the most ancient levels of Germanic paganism, Greek, Slavic, and Roman mythology." Because of this, Christianity viewed this tree-worship as idolatry and as a result, history is full of religious people destroying sacred trees and groves to convert the pagan (atheist) away from worshipping nature. Trees, "as centres of pagan worship...became the objects of Christian zeal...The emperor Theodosius II (A.D. 5th century) issued an edict directing that the groves be cut down unless they had already been appropriated for some purpose compatible with Christianity."

The most famous sacred tree-felling episode involved the ‘Apostle of the Germans,' St. Boniface. "In the midst of an awestruck crowd, (St. Boniface) attacked with an axe one of the chief objects of popular veneration, Donar's sacred oak, which as the first blows fell upon it, the huge tree crashed, splitting into four parts, and the people who had expected a judgment to descend upon the perpetrators of such an outrage acknowledged that their gods were powerless to protect their own sanctuaries. From that time on the work of evangelization advanced steadily."(See Nicole A. Roskos' article, "Felling Sacred Groves: Appropriation of a Christian Tradition for Antienvironmentalism," in EcoSpirit: Religions and Philosophies for the Earth, edited by Laurel Kearns and Catherine Keller, p. 483.)

Books like The Cross and the Rainforest by Robert Whelan still encourage this type of proselytizing activity to further the work of God, by chopping right at the heart of paganism, including "deforestation in the name of this ancient, saintly practice of felling the sacred trees"(Roskos, p. 483). Additionally, in the introduction to the book Where Garden Meets the Wilderness: Evangelical Entry into the Environmental Debate, Rev. John Michael Beers likens the author to Boniface, facing "today's New Age adherents in the environmental movement, who are not unlike the pagans of a millennium ago"(Roskos, p. 486). Additionally, the current environmental movement has as its representative the website Treehugger.com, arguably the most popular environmental site on the planet with more than 30 posts a day and an archive of over 20,000 articles.

Mormons clearly do not worship nature, but interestingly, do have their own grove of sacred trees. In fact, the Sacred Grove is arguably the most sacred site in all of Mormonism. This forested area of western New York in 1820 was the site of a visitation of the Father and the Son to the boy Joseph Smith. It is the most recent site we have record of where all three members of the Godhead have been. Additionally, the golden plates were handled by each of the Eight Witnesses in this grove.