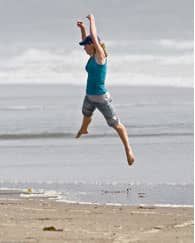 Many of us, including theologians, philosophers, linguists, and others, have thought of physical and spiritual, body and mind, as vexing pairs of opposites. We have tried to explain, at least to ourselves, how they fit together. But it seems to me that these pairs of words and what they stand for were never opposites and need not be in conflict. Having set aside centuries of learned thought on this matter with one sentence, what do I mean? And what are my credentials for saying what I've said?

Howard Gardner, who writes about human intelligence -- by which he means ways of knowing -- might answer by saying that I have high levels of several intelligences: kinetic, spatial, and verbal. In Gardner's system, these are three of the eight ways of human knowing and problem solving. He says that we all have them all, but at varying intensities. My mathematical way of knowing, for example, is barely there! Kinetic (movement) and spatial knowing led me into twenty years of professional dance and choreography and then into several years as an action- loving police officer. These ways of knowing also led me to one of the most deliriously happy days of my life, spent driving a Formula One race car at top speed around the Skip Barber track in Lime Rock, Connecticut. On the very different other hand of verbal intelligence, I am a writer with three degrees in religion, including a Ph.D. in theology and art.

Inside myself, these different ways of knowing and problem solving are not in conflict. But the determination of Western culture and the Christian churches to oppose the physical to the so-called "nonphysical" has often left me feeling as though I have a foot on the boat and a foot on the dock, and the boat is leaving.

Resolving the physical-spiritual, body-mind conflict seems to me devastatingly simple.  My answer goes like this. Without physicality, we have no ability to perceive or know anything, including all that we call "spiritual." Ideas, apprehensions of God, insights, feelings, mystical visions, responses to other people and the world, prayer, words, memory, movement, deciding, creating -- all of these arise from a spectacularly complex dance of cells, mitochondria, breath, nerves, bone, blood, muscle. When this dance stops, so do we and all of our perceptions. If we must have a pair of opposites, that pair is not physical versus spiritual, but physical versus dead. Not body versus mind, but body versus dead.

Of course, the churches have long posited ongoing being after death, and there are accounts of near-death, "out of body" experiences. But near death is not dead. Dead is another story, and we won't know how it goes until we get there. Most people don't like to hear this. Many reply to me, in obvious dismay, "You mean that's all?  Only the physical?"

Most people are too polite to go on and say what they're obviously thinking: that I am a sadly unspiritual person. But they're hardly to blame, because misunderstanding and denigrating physicality runs through the history of the churches and Western culture. Socially, all the way back through the medieval period to classical Athens, a gentleman was one who did not need to work with his hands, did not need to live by the sweat of his brow. On the other hand, the Greeks gave us the Olympics. But the oiled bodies out there throwing the discus didn't include Socrates and Plato.  The Olympics were for the gorgeous young, but the serious business was what their elders sat and talked about in the academies. So we speak of "higher" education, and many of us still secretly look down on "sweat of the brow" jobs.