Things Fall Together: The Life and Death of Faith on Campus 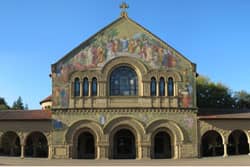 I remember well the sinking sensation in the pit of my stomach as I paced up and down the center aisle of Memorial Church.  The murmuring of 300 Stanford students wafted up beneath the soaring honey-colored arches.  It was ten minutes past the hour, and the All-Campus Praise meeting had failed to launch.  The speaker had not yet appeared.  Neither had the worship leader.  And since the latter had the overhead projection sheets with the lyrics for our songs, we could not start the meeting without him.

As the organizer of the event, I was responsible.  I had worked hard to spread the word about the nature and the importance of this meeting.  I had convinced students to put aside their studies for an evening of worshiping God together, the first all-campus worship event that anyone at Stanford could remember.  Now those students were pointing at their watches and asking when the service would start.

As I strode back and forth, the words drifted through my thoughts: Unless the Lord builds the house, its builders labor in vain (Psalm 127:1).  Had I sought to build this ‘house' on my own strength?  Had I failed to pray?  Was it possible that 300 Stanford students from various groups and fellowships should arrive, eager to worship God together for the first time in recent memory -- and yet God was not in it?

Now it was twelve minutes past the hour.  Thirteen...fourteen...fifteen.  The chaplains who had agreed to attend were getting frustrated.  A few students gathered their things and headed for the doors.  Everything was falling apart.  And I was powerless to hold it together.

When I signed a letter of intent to matriculate at Stanford University, some of the men in my church expressed concern for my spiritual welfare.  And indeed in my freshman year, and especially in my sophomore year as I took more courses in the philosophy and religious studies departments, I encountered numerous professors who sought to disabuse me of my religious delusions.  One professor was notorious amongst the Christians on campus for promising that they would no longer be Christians by the time his course was finished.  Others would never be so brazen, yet they accepted a worldview according to which traditional Christian faith is something best left behind by mature and sophisticated adults.

Yet those challenges were predictable.  Events and relationships that no one could have predicted shape my spiritual life in my college years far more profoundly.  Friendships I developed with campus ministers and with the Dean of Religious Life.  Service trips to South Central Los Angeles and to China.  Breaking my neck in a freak gymnastics accident.  The death of my grandfather.

And the movement that began that night when everything seemed to be falling apart.

Stanford, like many top schools, had too many evangelical student groups.  There were not twelve different religious groups on campus; there were twelve evangelical student groups.  Sometimes those groups competed over incoming students, especially if the students had notable talents and a passion for the kingdom of God.  The university newspaper showed a comic strip in which InterVarsity and Campus Crusade for Christ were depicted as dueling David and Goliath.  This was not the example of love and fellowship that we wanted to convey.

Several groups of students had begun, independently, to talk and pray about uniting the campus fellowships for events of worship and service.  Thus when two friends and I sent out emails inviting the student leaders of all the different fellowships to a planning meeting, the response was swift and strong.  Nearly all of the student leadership appeared at a restaurant in Palo Alto, ate dessert and formed a group called United in Christ that would plan and facilitate all-campus events.  I, in further proof of God's sense of humor, became the leader.

For weeks we prayed and plotted, and gave announcements at all the fellowships and churches.  We reached across the hardened lines of ethnic and religious divisions, from white Lutherans and Catholics to Korean Presbyterians to Hispanics and Native Americans and African-American Pentecostals.  The Dean let us use the magnificent church in the center of campus, and we planned to emphasize our unity in the love of God even as we displayed the diversity of our expressions of faith.  We would hear from a worship team, an a cappella group, a gospel choir, a testimony from a student who had recently come to faith, and a sermon from a star football player who was also an ordained and talented preacher.