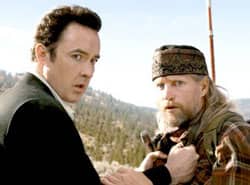 To call it the worst movie ever would be to afford it a distinction it does not deserve.  Maybe the movie is better designated as an undistinguished member of that pool of forgettable films that slide into the barrel of sludge that rests in the basement of Hollywood film history.  Remember The Day After Tomorrow?  I didn't think so.  Apparently director Roland Emmerich was conned into believing that we needed another dose of it.  Wrong!  How 2012 fails to be an Alan Smithee film is beyond me.

The premise is absolute hooey, based on the idea that neutrinos from the sun flood the planet in unprecedented numbers as the sun heats up.  These normally ineffectual particles begin to microwave the earth's core, which melts, leading to a general slippage of the earth's crust.  We don't have to wait long for the start of the CGI catastrophe.  Quite near the film's start, the world as we know it begins crumbling into the sea and tsunami flood what land remains.  Hopeful optimist Jackson Curtis (John Cusack) gathers up his children, his ex-wife, and her boyfriend, and leads them on a frantic journey to safety, which is found in the form of spaceships hidden in China.  At least, Curtis runs in that direction because mad survivalist and radio pirate Charlie Frost (Woody Harrelson) suggests it.

Something or other is always crashing, collapsing, or blowing up, and Curtis and family dodge with all their might.  Against that background Emmerich places an unwieldy cast of dozens who spend the movie bickering about right and wrong, searching for the selfless and the noble within themselves, and dying before we care about them.  Indeed, Emmerich seems fond of disposing of his stick figures for no greater purpose than to advance his poor excuse for a plot.

The film is an emotional vacuum.  The dialogue is superficial, the characters weak, and the premise laughable.  We might say, "So what?  I'm here for the special effects!"  After all, that is the main appeal of sci-fi blockbusters since the deployment of CGI-based special effects, isn't it?  But even here the movie disappoints.  The effects were blurry, and it felt as though Emmerich revved up the film speed, as if that would increase our sense of urgency.  All it did was confound the eye's efforts to signal the brain.

Some people decided to leave about 45 minutes into the movie.  I noticed others took out their Blackberrys and started playing games.  Still others, like the woman next to me, checked the time every 15-20 minutes.  I was doing that too.  Why did I stay?  I remained to the end just so I could tell you to save your money and do something more pleasurable, like digging your own eyes out with old rusty spoons.

It's very likely that in about 2 billion years, the sun will begin to expand, and its increased proximity and heat will make life on earth uninhabitable.  Perhaps another 3 billion years after that, the earth's core will heat to the point that the crust is displaced and the magnetic poles shift.  We'll be long gone.  There certainly won't be a new dawn and a new day -- the sun will have burnt out.  As a piece of science fiction, 2012 is so improbable that we're forced to look elsewhere to understand its meaning, and indeed the movie is only sensible as wish-fulfillment.  It seems there must be those longing to just clean the slate and start again, even if that means seven billion people must die.

This casually cynical approach to the value of human life cannot be supported by any coherent religious worldview.  2012 isn't actively anti-religious, but it shows real ambivalence toward established traditions.  Buddhism seems to be acceptable, inasmuch as Buddhism is Tibetan and requires nothing more than a kind heart.  The attitude toward the Christian tradition is more ambivalent.  On the one hand the movie takes cheap shots at the faithful using heavy-handed symbolism entirely lacking in nuance or intelligence.  On the other hand the protagonists are routinely exhorted to "have faith," although it's impossible to tell what precisely they are supposed to have faith in.