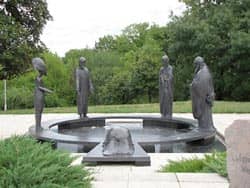 I think I have always been a seeker. Even as a young child in my Sunday school classes, I asked a lot of questions. I took church attendance very seriously, seldom missing a Sunday, and participated in all of the special events. I sang in the children's choir and eventually in the adult choir every Sunday. I assumed leadership positions when asked and even attended regional and national events as a youth representative for our Presbytery.

But more than once, I was told I asked too many questions, suggesting I did not have enough "faith." One of my favorite Sunday school teachers even set up a meeting with our rather strict minister once "so he could deal with all of my questions." He was certainly nice enough, but in a rather patronizing way he suggested that my questions would someday seem rather childish when my faith matured. Little did either of us know at that time that they would never end.

I don't think my experience was unique for those of us who were growing up in small communities in the 1950s. Some people just shut down and quit thinking about those ultimate questions. Others just quit going to church. And a few people like me kept looking for answers, and the answers we did find seemed to lead to other questions. That is probably why I ended up taking so many philosophy classes in college. That is why I drove all night to hear a talk by the "radical" Bishop Pike in the 1960s. And that is why I have sought out every opportunity to expand my understanding of the meaning of life and how to live it ever since. In the late ‘60s, I studied the works of G.I. Gurdjieff, years later met regularly with a group of followers of P.D. Ouspensky, a student of Gurdjieff, and I studied various eastern and esoteric teachers for three decades.

The strange thing was that, although I never felt like I had found "the answer" or the "correct way," it never seemed like I had been wasting my time or going down the wrong path. Quite to the contrary, the more I learned, the more interested I was in going further. I believe it is unfortunate that some large conservative churches have labeled a "seeker" as someone who has just not quite got it or found it yet. They even have special services for those who they deem "seekers" as opposed, I presume, to "believers." I have had a rich and rewarding life as a seeker, and I do not expect that to change.

The thing that became clear to me was that even though the teachers I encountered over the years, from books as well as in person, came from very different worlds, backgrounds, and social settings, without exception at some point in their lives all of them had some extraordinary mystical experience that changed the way they viewed reality and themselves in that reality. They suddenly had eyes to see and ears to hear something significant that they had not had before. And though they used different languages, different metaphors, and different teaching styles to explain what they had experienced, it was clear, with a minimal amount of study, to see that they had more in common than not.

As a result of the incredible abundance of biblical scholarship that had been done in the later part of the 20th century and continues to this day, many of us welcomed the opportunity to re-engage Jesus as a great spiritual teacher. I found myself drawn to the man who clearly had a life-changing mystical experience that not only changed him but changed the people around him. I no longer was trying to ignore things that had made no sense to me, even as a young boy, and I began to see Jesus as one among other teachers who had a common message about who and what we are as humans and our relationship with all Creation.

None of that would have been so exciting or as meaningful if I had not immersed myself over the years in other great teachers both traditional and esoteric. Certainly the most influential and helpful reading I had done over the years was in the various Buddhist traditions. It is true that on the surface there are significant differences from the teachings of Jesus and the Buddha. And it seems important to note that the historical Jesus had only three or four years to formulate and articulate his teachings, while the Buddha's teachings evolved over several decades. And certainly these two great teachers were coming out of very different cultures and social settings.

However, it was the in-depth Buddhist teachings on compassion and kindness that helped me begin to see the teachings of Jesus as a path that could enable others to have a similar experience of the Divine.