The wolf shall live with the lamb, the leopard shall lie down with the kid, the calf and the lion and the fatling together, and a little child shall lead them. The cow and the bear shall graze, their young shall lie down together; and the lion shall eat straw like the ox. The nursing child shall play over the hole of the asp, and the weaned child shall put its hand on the adder's den. They will not hurt or destroy on all my holy mountain; for the earth will be full of the knowledge of the Lord as the waters cover the sea.Isaiah 11:6-9 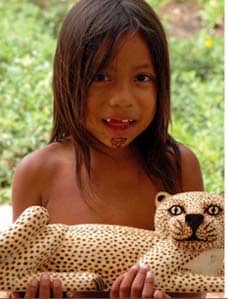 I would like us to read this text as an urgent call from the divine to restore peace in the world. Our world is sick, suffering under the burdens of violence and terror, human rivalry, selfish ambition, greed, and enmity, which alienate people from one another and objectify nature, thus bringing about its current pitiful condition. Human beings can be wilder than beasts: lion and tiger hunt their prey only to satisfy their hunger; men and women can kill for pleasure. This can bring great devastation. Yes, the current condition of the world is like a woman bleeding, a mother groaning in pain (actually, in my culture, the earth is called mother). As offspring of the earth we should be troubled by the cry and hear the call to nurture her back to health. Isaiah's prophetic words then can be read as God's call to the whole of creation to strive toward reconciliation and peace.

The picture of harmony as well as the tranquil sphere of the primeval paradise contained in verses 6-8 is a portrayal of the world transformed in a way befitting God's intention for the universe. There should be no more domination, nor fear of being victimized, when friendship and equal partnership among all living beings is established in the world. The divine imperative must be fulfilled, and it is in this context that I would like to share the following experience.

About two years ago, the Protestant Church in the Moluccas, Indonesia held a program for pastors of the same church mainly focusing on the theme, "Living and Witnessing in the Pluralistic World." One of the sessions in the program was an overnight stay for participants in the homes of our Muslim sisters and brothers, with the objective of rebuilding social relationships between the various faith communities, which were severely damaged after the traumatic experiences of brutal mass conflict involving Muslim and Christian groups in the region.

To many people, this was seen as one of the most undesirable programs ever drawn up by the church. Such rejection is understandable because the memory of violence relating to the past power contest among the warring groups was still vivid in people's minds. "How could you plan such a program?" some people asked us. "What if the pastors get killed in the middle of the night? Or what will happen if they are poisoned?" So many "what ifs" were raised by people in the church. Even the pastors themselves were doubtful; many got really scared. But when they came back from the visit, they were totally changed, as though they had gone through a process of metamorphosis. Apparently they enjoyed their stay and the company of their hosts and hostesses so much so that some even agreed to bring their own families to get better acquainted with the newly found friends. The old fear and prejudices disappeared and were replaced by mutual appreciation and kindness. Early this year, a local NGO chaired by a young female Muslim organized a program of the same nature, this time bringing Muslim youth to spend a night with Christian families. The response from people in general was most encouraging.

For the community of faith, commitment to peace and reconciliation is unavoidable. The God whom we worship is a God of peace, who intends to restore peace to the world. The same God calls us into this ministry of reconciliation (2 Cor. 8:15).

Of course, peace building is never easy to accomplish. Speaking from experience, I have to say that peace building can become difficult, mostly because those involved in power contests are often too reluctant to give up their games, due to greed and lust for money and power. It is common knowledge in various conflict- and war-torn areas that there are certain individuals and parties who accumulate capital and power from the tragedy. The longer the conflict situation prevails, the more intense it becomes, and the greater the gains they make from it.

Human beings really can be wilder than beasts in the jungle. But such things must not continue. Change must come about, a drastic and total renewal needs to happen, allowing wolves and lambs to sit side by side, babes to play near poisonous snake and lions to eat straw ... (v. 7), according to Isaiah. But is this possible? In another text, the same prophet speaks about the time that is to come, when people will pound their swords and spears into shovels and rakes, and they will study war no more (Isaiah 2:4).