Hanukah As It Is 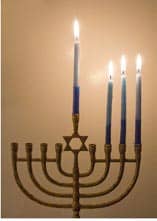 The name of the holiday, Hanukkah, means Rededication. There are innumerable ways of spelling Hanukkah in transliteration.  To attempt them all here would make this monograph prohibitively long. The name refers not to the war between the Jews and the Syrian/Greeks but to the work of cleaning and ritually purifying the Temple after the war.

Hanukah, the eight-day festival begins on Kislev 25-Tevet 2 (which falls in the month of December).

In the 4th century B.C.E., Alexander III, known as Alexander the Great, conquered the entire Middle East and promptly died.  After his death the empire was split into four factions.  For the purposes of our story only two are of consequence, the Seleucids, who controlled what is roughly now Syria, and the Ptolemies, who controlled Egypt.  These two factions fought for supremacy in the Middle East and Israel was caught in the middle.  At times the Ptolemies held sway over Israel and at other times it was the Seleucids.

The story of Hanukkah has to do with the Seleucid Empire and its control over Israel.  In 167 B.C.E. Antiochus (who called himself Epiphanies, i.e., God has made manifest) forced all of the peoples under his rule to Hellenize (live according to Greek culture and religion).  He outlawed Jewish practice such as the celebration of Shabbat and the ritual of Brit Milah (circumcision).  He tried to replace Jewish worship with the worship of Greek gods, including the sacrifice of non-Kosher animals even in the Holy Temple.

When the Greeks came to Modi'in, a small town in the Galil, and set up an altar, an old priest named Matityahu attacked and killed a Jew who was about to make a sacrifice at the altar.  He rallied his sons and a band of warriors who knew the land well. There followed a protracted guerilla war against the Greeks, led by Matityahu and his five sons.  Matityahu passed on the leadership of the rebellion to his eldest son, Yehudah, who was called "HaMaccabee" (the Hammer).

The Maccabees defeated the Greeks and liberated Jerusalem. But they did not begin the celebration of liberation.  They had one more task to perform.  They began the long hard task of cleaning the Temple. They found that they had only one small cruse of oil with which to relight the sacred Menorah. (Menorah means candelabra. In this case, it refers to the seven-branched candelabra that was situated in the Temple and kept lit on a regular basis. The origin of the Menorah is a fascinating study in itself. As a tease, it has to do with the Moriah, the sage plant found in Israel.) But that cruse miraculously lasted for eight days (until they could produce enough ritually pure oil).

The literature of Hanukah is found in collections of Apocryphal literature known as Books of the Maccabees, in the works of Josephus, and in the Talmud. It is not mentioned in the Jewish Bible. (The Catholic Bible, among others, canonized the book of Maccabees so it can be found in what is called the intertestamental writings of the Church.)

The lesson of the history of Hanukah is that a small, committed group of guerrilla warriors fighting on their own territory can demoralize and defeat a world power trying to occupy their land.  But a more powerful lesson has to do with why we went to war in the first place.  We did not go to war for political freedom.  We did not go to war to stop the heavy tax burden.  When the conquerors came, we did not fight.  When the conquerors taxed us, we did not resist them.  When the conquerors imposed their culture upon us, we did not revolt. But when they desecrated our Holy Places and refused to allow our Holy Practices, we declared our spiritual freedom and fought the oppressor. And when the war was won, we did not seek to conquer other lands nor enforce our beliefs on anyone.  When the war was won, we returned and peacefully, joyously cleaned up the Temple and relit the Menorah, a large, seven-branched candelabra, arguably the oldest symbol in Judaism.