Like Patheos? Subscribe to our “Best of Patheos” newsletter.
From time to time you will also receive offers from our partners. You can cancel at any time. 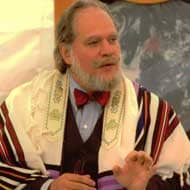 Rabbi Bahir Davis is from a rabbinic family that includes his brother, father and grandfather. He studied to become a rabbi at various yeshivas in the United States and Israel and holds two Smichot; one signed by rabbis from many branches of Judaism, including the late Rabbi Alexander Schindler (zt'l) past President of the Union of Reform Judaism, and another from the founder of the Jewish Renewal movement, Rabbi Zalman Schachter-Shalomi. Reb Bahir is a Maggid (storyteller) in the best tradition of Jewish storytelling and is known for his vibrant humor and imagery. His eclectic background and study of Zen Buddhism, Japanese culture, Aikido, and Native American culture inform his approach to Judaism and have opened up many insights on the nature of the Jewish path. He has worked with numerous outreach programs, held the post of Executive Director of the Introduction to Judaism Program for the Union of Reform Judaism, and has served as a congregational rabbi.

Reb Bahir refuses to be connected with any one movement, preferring to serve the entire spectrum of the Jewish community. He is the spiritual leader of Rocky Mountain Hai, based in Lafayette, Colorado.

An End to Social Strife over Sexual Orientation
Rabbi Bahir Davis | July 10, 2009
It is simple really -– we turn the secular marriage into what it is, a contract between......

Israel, the Jewish State
Rabbi Bahir Davis | September 01, 2009
What does it mean to say that Israel is Jewish?...

Festivals of Memory
Rabbi Bahir Davis | November 18, 2009
Like Thanksgiving our three Hagim began as harvest festivals We still remember that......

The Life Spiral of a Jew
Rabbi Bahir Davis | June 01, 2010
The Jewish life turns in a spiral, moving from moment to moment in celebration....

The Torah
Rabbi Bahir Davis | January 01, 2000
The most important written work to the Jewish people is the Torah (pronounced: Toe-......

Hanukah As It Is
Rabbi Bahir Davis | November 18, 2009
Learn the story the facts and the traditions of the holiday...
View all featured writers