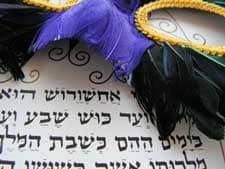 There is a wonderful phrase in Hebrew:  "MiSheNichnas Adar, Marbim B'Simhah."A loose translation would be: "When we enter Adar we should elevate our joy level!"  In other words, when Adar comes around, we need to pull out our 'joy' stick and check our joy level.  One reason for our joy 'check up' is the holiday of Purim.

Purim is based on Megillat Ester, a book in our TaNaCh (Bible).  Interestingly, there is no mention of G-d in the Book of Ester.  A Kabbalistic view of this is that G-d remained hidden and worked through Ester and Mordechai to save the Jewish people.

Purim has all the elements of a great adventure story.  It is an ancient story of court intrigue, deception, miscommunication, drunken parties, assassination plots, a foolish king, a rebellious queen, villains, a strong hero, and one beautiful heroine.  There is humor and horror, despondency and delight, trepidation and triumph, all in all a great 'read'.  For one little holiday, Purim certainly has it all. It is a one-day, carnival-like celebration in Adar.

King Achashveyrosh and his court held a great feast, lasting six months.  (You have to admit that is one heck of a party.)  During the long feasts, and after a lot of food and wine, the king called for his wife, Queen Vashti, to appear. However, Vashti refused.

The Midrash (a series of biblical commentaries) says that Vashti refused out of modesty, because she was summoned in order to dance naked in front of the king and his friends.  This might be the first recorded strike for the women's movement in literature.

When she did not appear, the king became very angry. His advisers, fearing their own wives would take courage from Vashti and become similarly independent, told the king that he had to divorce Vashti.

With Vashti gone, the foolish king was advised to stage a beauty contest to pick a new wife. A beautiful Jewish orphan named Esther was chosen as the new queen. Esther, whose Hebrew name was Hadassah, was raised by her uncle Mordechai.  Mordechai told Esther not to reveal that she was Jewish.

Soon after Esther became queen, Mordechai overheard an assassination plot against the king. He reported the conversation to the palace, and the two perpetrators were apprehended and executed.  The incident was recorded in the king's chronicles, but quickly forgotten.

Meanwhile, Haman, the king's prime minister, passed an edict that all must bow before him. Mordechai refused to bow. Haman decided to take revenge on Mordechai by convincing King Achashveyrosh to decree that all Jews be executed. Haman drew lots to choose the day: the 14th of Adar, the day we celebrate Purim.

Mordechai told Esther that it was because of Haman's evil plan that she, a Jewish woman, had become queen and that she must save her people. Esther agreed. She and her people fasted and prayed, requesting Divine assistance, and the plan came to her.

That night, King Achashveyrosh had trouble sleeping. To pass the time, he asked that his book of chronicles be read out loud. The chapter read to him was about the time Mordechai revealed an assassination plot against him. The king was told that Mordechai was never rewarded.

After this humiliation, Haman attended Esther's second banquet, where Esther revealed that she was Jewish and exposed Haman's evil plot. The angry king ordered Haman executed. However, the king was unable to rescind Haman's decree since it already bore the king's seal.

Instead, he allowed the Jews to defend themselves.

So, on the 13th of Adar, the Jews and all loyal Persians defeated those who would destroy the Jews.  The day turned from grief and mourning to one of joy. In fact, the joy of Purim is so great, we are told, that even in Messianic times, unlike other holidays, Purim will be celebrated as is.  Other holidays, especially those commemorating challenges and hardships, will be flipped to joyous outpouring, but Purim is a foretaste -- no changes needed.