The Life Spiral of a Jew 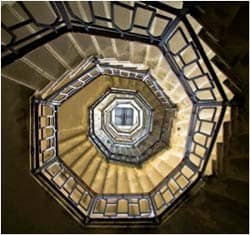 In Judaism, we start not with birth but before birth and appropriately with the murky mists of myth. We are taught that before we are born we are taught all the secrets of life, the universe and everything. Then, just after our soul is poured into the fetus, we are touched just above the mouth (the philtrum) and we forget. That might be the first of our life spiral ceremonies.

You ask why I call it a life spiral instead of a life cycle? The answer is a matter of perspective. If one looks down upon a spiral one sees a circle, for all of the cycles are one on top of the other, hiding one beneath the one above. If one looks at that same spiral from the side, one sees a line and no circles at all. Life is all about perspective. Let us look first down upon the spiral and see a circle as a cycle of life.

In Judaism we celebrate moments along the cycle of life. We start with birth, that joyous moment of beginnings. It is the original 'coming out ceremony.' The first born, that is the first to come out of the womb, is given a special ceremony called Pidyon HaBen or Peter Rehem, the opening of the womb. We attach this newness to an ancient custom. Money is given to a Cohen, one of those whose ancestors served in the Temple of old. This custom serves as a memory peg, a dowel that glues us to our past as we begin our future in this moment.

The next ceremony takes place in eight days if the child is male and twenty-eight days (a moon cycle) if the child is female. The former is a very ancient and lovely if barbaric ceremony while the latter is a new attachment to the parade of life cycle ceremonies. A boy who survives a week is brought into the covenant of Judaism with a Brit Milah, literally a 'contract of circumcision.' The foreskin of the boy is removed with great ceremony and a drop of blood. Many reasons are offered for this tradition but they all pale, as do some of the guests and parents at the ceremony, compared to the stark reality that it is an ancient ceremony of bringing our sons into the contract, indeed cutting the contract with G, the Jewish tribe, and this boy.

It is a fact of ancient history that there was no ceremony in ancient times for female children. I will not go through the mental gymnastics of justification. It did not exist, but now it does. In ancient times we acted much as ancient people did; this is no surprise. Now we have added a meaningful moment for female children. It is called by many different names, Brit Bat, the covenant of women is most accepted, but in my opinion the best name is Brit Levanah, the covenant of the moon, based on the Midrash that women were given the moon festivals by G for their act of faith at the shameful time of the Golden Calf incident. Connected to that is, of course, the relationship between the monthly cycle of women and the cycle of the moon.

This ceremony offers the parents and planners more creativity for gathering than does the ceremony for boys and this is fitting. One Hebrew word for female is Nekavah. Women in Judaism are the creative ones who perforate tradition and gather in, which the term Nekavah implies. Men are the 'rememberers' as the term for male, Zachar, suggests (you might be more familiar with its cousin, Zachor, that is defined as remember).

The next ceremony that is familiar to all is the Bar or Bat Mitzvah at age 13 for a boy, and 12 for a girl (for as any woman will tell you, girls mature faster than boys). Again this originated with a son (Bar) coming to the age of responsibility (Mitzvah). In this century, with the liberal movements within our tribe, a daughter (Bat) was acknowledged as having come into an age of responsibility (Mitzvah) as well. Originally (and one must be careful using that word, as what was original may be lost in the ancient time), a boy was brought to the Bimah (that elevated place in the synagogue where Torah was read) to give a blessing before and after the reading of Torah. This was the announcement that he was of age to be called upon to help the tribe in religious and communal activities. Over time this ceremony has gained in pomp and circumstance so that now, in many cases and in every congregation where I have been the rabbi, the Bar Mitzvah leads the entire service in our ancient spirit language of Hebrew. He reads and translates or chants and translates Torah for the congregation. And of equal importance, he gives us a teaching on Torah that is original to him.