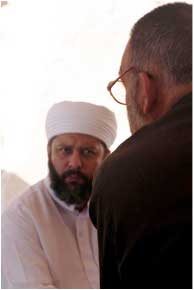 "We learn who we are through struggling with text," said Rabbi Mark S. Diamond, executive vice president of the Board of Rabbis of Southern California. "We must learn from the scars, from the blemishes, from the ugly parts of our textual tradition, our history and our faith."

Scholars, clergy, and seminarians gathered at the Luxe Hotel to discuss troubling passages and ideas in Christianity, Judaism, and Islam, and ways of understanding them in modern times, as part of "Troubling Traditions: Wrestling With Problem Passages," a conference co-sponsored by the Board of Rabbis of Southern California and the Center for Christian-Jewish Understanding of Sacred Heart University.

While many of the presenters and attendees at the conference were from the more liberal strands of their religions - few mainstream Orthodox or hardcore evangelicals were present - the hope for the meetings is that it will slowly transform the more extreme pockets, or at least save the moderates from them.

"I think we have to teach these texts to our children," Diamond said. "I worry if we don't, others will take them out of context and put a real negative spin - with potentially very dangerous consequences."

In a session on chosenness - a timely talk given conservative commentator Ann Coulter's Oct. 11 comment, "We just want Jews to be perfected ... that is what Christians consider themselves: perfected Jews" - speakers addressed how adherents have taken troubling passages literally and disseminated the resulting ideas to the world.

The Rev. Alexei Smith, the ecumenical and inter-religious officer of the Catholic Archdiocese of Los Angeles, refers to a problematic passage in the Gospel of Mark: "He who has believed and has been baptized shall be saved but he who has disbelieved shall be condemned." He says the authors of the text were primarily concerned with the faith of Christians in the 2nd century.

"Even today some narrowly define it even further, that outside the Catholic church there is no salvation," he said.

However, he said, the modern interpretation is that believers of other faiths who engage in "the sincere practice of what is good in their own religion," will receive salvation.

"And they shall receive salvation in Jesus Christ even though they do not acknowledge him," he said.

In the end, Smith said, the task set before his co-religionists "is to formulate a theology of the multiplicity of God without diminishing the unique privilege of our belief."

How does any religion assert its own uniqueness while at the same time allowing for other faiths?

Each faith stakes a claim over chosenness.

Jews turn to Deuteronomy, "For you are a people consecrated to the Lord Your God: of all the peoples of the earth, the Lord your God chose you to be His treasured people."

In the Christian Bible, it says in 1 Peter, "You are a chosen race, a royal priesthood, a dedicated nation, a people claimed by God for his own, to proclaim the glorious deeds of him who has called you out of darkness into his marvelous light."

And as it says in the Quran, "You are the best community that has been brought forth for humanity, commanding the reputable and forbidding the disreputable, and believing in God"; and in the surah it says, "This day I have perfected your religion for you, completed my favor upon you, and have chosen for you Islam as your religion."

"The real origin of chosenness has to do with the structure of tribalism in general," said professor Reuven Firestone, director of the Institute for the study of Jewish-Muslim interrelations at Hebrew Union College-Jewish Institute of Religion (HUC-JIR). Israel's God was the God of Israel just as the Moabites' God was the God of Moab.

"It's logical that the relationship would be unique," he said.

jpg?w=225&hash=0C15C3CA8353523874CDF0F1BFB7E6A84BA183C8" style="margin: 0px 8px; float: left;" title="Photo courtesy of hoyasmeg via Flickr Creative Commons license" width="225">"Just as the God of Israel fought for Israel against its enemies, the God of Moab fought its battles," he said. "The notion of chosenness became a powerful tool to claim authenticity to critique the authenticity of others."