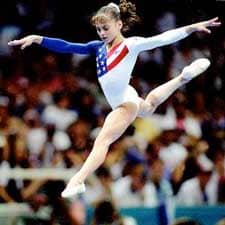 Patheos has reached out to Olympic and professional athletes to ask how they hold their athletic and spiritual lives together.  In 1995, at the age of 13, under the training of Bela and Marta Karolyi, Dominique Moceanu became the youngest gymnast ever to win the Senior National Championships.  In the following year she won a gold medal with the United States team at the 1996 Olympic Games in Atlanta.

Timothy Dalrymple spoke with her by phone.  Also, see the video interview at the end, recorded via Skype.

Can you tell us about your religious upbringing and how you received it as a child?

I was raised into the Romanian Orthodox culture by my parents, and most notably my mother, who is a profoundly religious and spiritual woman.  The people of Romania are deeply spiritual and devoted to faith.  For as long as I can remember, my mother went to church every single Sunday.  She was born and raised in Romania as a person with limited means, and faith was something she could rely on, something that was free.

I began gymnastics when I was three.  In Romania, of course, gymnastics is among the most popular sports, and my parents had a dream of escaping the Ceausescu regime and giving their child a better life.  So they came to the United States and put me in gymnastics.  Since my mother is an extremely devoted Christian Orthodox woman, she prayed a great deal and taught me how to pray.  I saw how her faith brought her peace.  So when things were difficult at home or at the gym, emotionally or physically, I turned to prayer for guidance.  What I saw in my mother was passed down to me.

Did your religious upbringing have an impact on your life as a gymnast?  How did your faith shape your experience as an athlete?

My mother's example affected me greatly. She gave me rosaries and prayer booklets to put in my gym bag.  I really never took them out of there; they were a constant reminder that I was protected.  Gymnastics is a dangerous sport.  Maybe it was psychological, but it definitely helped me as an athlete to have those in my bag and feel safe.

I also relied on prayer a great deal to get me through practices.  "Just pray," my mother always said.  "Just pray about things and it will all be okay."  So I prayed every night before I went to bed, and every day before practice, and sometimes even during practices.

It may sound excessive, but when you're striving for perfection, and you feel such extraordinary pressure to be perfect, you're always afraid.  I relied on my faith, and that gave me the courage to believe that everything was going to be okay.  I knew that God would never let me down.

Did you pray to make the Olympics?

I definitely prayed to make the Olympics.  Right before the Olympics, I was diagnosed with a four-centimeter stress fracture in my right tibia.  I had to sit out of the Olympic Trials, and my Olympic dream was hanging in the balance.  It was very, very stressful.  So of course I prayed.  My mother told me later, as I became an adult, that she would go into the woods behind the Karolyi ranch and just cry, because she knew how hard I had worked to make the Olympic team. My dream and all of my work was hanging by a thread.

My body was falling apart at 14 years old, and I was confused about why this was happening now.  It was a struggle.  I kept praying, "Please God, help me make this Olympic team that I've always worked for."

I knew that God had a path for me and would bring what was best for me - but I also had a feeling, deep down, that I was meant to be on that team.  But when it's left up to chance, and you're relying on a petition, and you're relying on your body to heal in time to do your best, there are a lot of uncertainties.  That was my first experience with real adversity.  It taught me some things about how to deal with emotional pain, and how to overcome the difficulties and road blocks along the way to achieving my goals.

Ultimately I was petitioned onto the team on the strength of my earlier performances.  When they announced that I had made the Olympic Team, at the Olympic Trials, I felt very relieved.  I was so young, and there was so much tension and stress.  I relied on my faith that things were going to happen the way they were supposed to happen.  Then as I stood on the floor with my teammates, and we stood together before the crowd as the new Olympic team, I felt such gratitude.  I definitely said "Thank you, Lord, for helping make this happen."