It is the Chabad-Lubavitch sect of Hasidic Judaism that has propagated the public display of hanukkiyot in cities throughout the United States, Canada, and Europe -- and even to Moscow in 1991. Their large, angular hanukkiyot can be seen in public places across the world. These displays also have made headlines because of controversies they have generated concerning the separation of church and state.

In 1989, the issue came as far as the U.S. Supreme Court in Allegheny County vs. Greater Pittsburgh ACLU. The court was to decide whether the county violated the First Amendment's clause establishing that the government may not endorse or prohibit the free exercise of any religion. At issue was the displaying of a crèche (a Christian nativity scene) and a hanukkiyah on public property. The court ruled against the crèche but allowed the displaying of a hanukkiyah along with a Christmas tree, since the court perceived these to be secular symbols of religious holidays and therefore not an endorsement of any particular religious belief.

While this issue still causes its fair share of controversy (including issues particular to public schools), it has become a familiar sight to see even 30-foot hanukkiyot lit in places such as Central Park in New York City. In fact, even President George W. Bush made a point of lighting a hanukkiyah at the White House in 2001 -- using a menorah that made its way from Lvov, Poland, after the Holocaust. 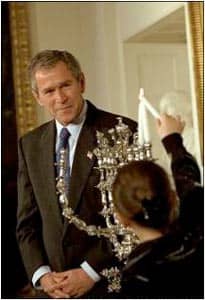 Today, one can scarcely find a Jewish home without at least one hanukkiyah, and candles can be found in places as mundane as the local pharmacy. Local and national politicians, businesses from banks to bakeries, and even television stations are displaying hanukkiyot for publicity, solidarity, and sometimes as a response to over-zealous Christmas displays.

All of this public attention has not caused the family candle-lighting to disappear, however. On the contrary, more and more families are finding this simple ritual a very meaningful time for their families to gather. The miracle of Hanukkah will continue to be publicized in the homes of Jews throughout the world, even as it is granted ever-increasing exposure in the public eye.

This article was originally published by My Jewish Learning, a Patheos Partner site, and is reprinted with permission.

Rabbi Iscah Waldman is the director of education and family programming at Ansche Chesed in New York City.