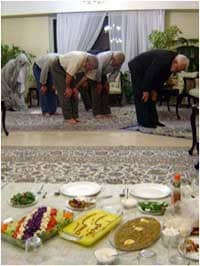 If prayer five times a day strikes some as demanding, how about no food, no drink, no smoking, and no sex -- from dawn to dusk for a whole month?

Inspiring, awesome, or extreme? In our secular, materialistic world, some see such religious abstinence as extreme or even harmful. Yet we live in a society in which rigorous dieting and exercise for health are multibillion-pound industries.

Similarly, grueling marathons and triathlons or 12-to-18-hour professional workdays are often lauded and justified with the modern mantra of "No pain, no gain."

For Muslims the month-long daytime fast of Ramadan, which is just beginning, is a special time set aside to remember God through physical and spiritual discipline: abstinence, devoting more time and attention to prayer and reflection on human frailty and dependence on God, performing good works for the poor and less fortunate.

It might seem curious in the context of fasting to speak of celebration and joy rather than suffering and endurance, but many Muslims look forward to Ramadan. Even many who are not particularly religiously observant in the rest of the year choose to observe this communal fast. It is a time for family and communal gathering, a time to go "home" to share the experience. Every night family and friends come together to share a "breakfast" at dusk. Ramadan's fasting from sunrise to sunset, followed by a breaking of the fast, evening celebrations in which families, friends, and neighbors come together to enjoy very generous meals, special desserts, and socializing late into the night.

Many go to a mosque to participate in the discipline of reciting the Koran, read in its entirety during this special month.

When my wife and I first travelled in the Muslim world in the early 1970s I was struck by a scroll or wall hanging that I purchased in Damascus, depicting the chapters of the entire Koran divided into thirty sections. I was surprised to learn that it reflected the Ramadan practice of reciting a different Koranic section each night. Koranic recitation (the word Koran means recitation) is meant to transform the person reciting -- just as it transformed Muhammad from a Meccan businessman to the Prophet of a major world faith. As the Koran says, "This Koran has been sent down by the Lord of the Worlds: The trusted Spirit brought it down upon your heart" (26: 194).

The month of Ramadan is also the time when Muslims fulfill another pillar of Islam, almsgiving (zakat), the pillar that, as the saying goes, gains Muslims entrance to heaven.

Social justice, a concern for the poor, orphans and widows, and family members is a major Koranic theme. The Koran specifically condemns those who say people are meant to be poor and should be left to their own fate because God wills it. Like tithing in Christianity, Islam requires its followers to help less fortunate members of the community, but unlike tithing, which is based upon a percentage of one's income, zakat is a wealth tax, requiring one to give 2.5 per cent of all liquid assets each year.

Zakat is not viewed as voluntary or as charity. In Islam, the true owner of things is not man but God; zakat is a required sharing of the wealth that one has received as a trust from God.

But how does zakat play out practically? Many give their zakat to less fortunate family members or those in their community. Others, often those with considerable wealth, distribute their zakat more broadly for philanthropic projects like the building of mosques, libraries, clinics, locally and internationally, scholarships for students, assistance for medical care and social services.

Thus, it is not uncommon for Muslim fundraisers to approach wealthy Muslims at home and overseas during Ramadan for financial support for their projects.
Ramadan ends with one of the two major Islamic feasts (Eids), the Festival of Breaking the Fast, Eid al-Fitr. Relatives often come from far and wide to visit and celebrate together for several days or even weeks. The celebration resembles Christmas or Chanukah in its religious joyfulness, special celebrations, and gift-giving.

For many Muslims, the religious experience and joy of Ramadan continues with the opportunity during the following month of pilgrimage, the pilgrimage or Haj to Mecca. At least once, every adult Muslim who is physically and financially able is required to make to make this pilgrimage, becoming a pilgrim totally at God's service.

Just as Muslims are united five times each day as they face Mecca in worship, each year believers make the physical journey to this spiritual centre of Islam, where they again experience the unity, breadth, and diversity of the Islamic community.