Sunday among the Mormons 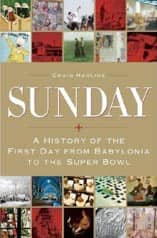 I'll start this with two anecdotes of my own, from a Mormon ward in Belgium.

Last Sunday, in church, the bishop's sister told us that her little boys were so excited because they were looking forward to the swimming party in the afternoon. The bishop's own family and the families of his siblings were going to enjoy a pleasurable family Sunday afternoon: togetherness, games, swimming, fun and food, and it would probably last until late in the evening.

A few Sundays before, at the end of the meeting block, as I still had something else to attend to, my wife asked brother and sister M. if she could get a ride home with them. The M's live in our neighborhood, about six miles from the chapel.

"Of course," they said.  "We just need to make a little detour."

The detour turned out to be a ten mile extra trip to a specific baker where the M's got their Sunday pastries.

"We've been going to this one for twenty years. For us, he is the best."

Among Belgian bakers, whose refined, fragrant shops can be found in every neighborhood, each has their reputation. Sunday is their peak day, when from 7 a.m. on, customers form lines in the street. For nothing equals the freshly baked delicacies to enjoy on Sunday, when a typical Belgian family gathers around a festive table at home.

"We've got children and grandchildren coming over this afternoon," added brother M., to explain the quantity bought.

One must read Craig Harline's Sunday: A History of the First Day from Babylonia to the Super Bowl to understand the fascinating historical and cultural elements that have shaped the concept of Sunday observance in various countries. Dr. Harline is professor of history at BYU, and already the author of four remarkable books on aspects of Catholic history in the age of the Reformation, with special attention to Flanders and the Netherlands.

Sunday has a much broader chronological and geographical scope: it is the history of the concept of this special day in the Western world, from its origins in Babylonian and Jewish traditions, up to Super Bowl Sunday. Three thousand years of Sundays.

Harline warns the reader from the onset: it is impossible to describe all aspects, moments, places, and perspectives dealing with Sunday in a single book. A limited focus implies selection, and Harline had to make severe and sometimes arbitrary choices. He therefore concentrates on Western Europe and the United States, and on representative moments in time. Still, for the non-specialist the 450 pages form a coherent overview of major developments, in clearly delineated chapters.

Chapter 1 is a little more theoretical than other chapters, as it explains how pagan and Jewish traditions evolved into a Roman-Christian Sun-day. Noteworthy is that to early Christians Sunday, or the Lord's Day as they called it, had nothing to do with the Jewish Sabbath, and did not follow any Sabbath rhythms except for a moment of "worship." Most of Sunday was a normal working day. Only after A.D. 500 did Sunday begin to acquire Sabbath-like characteristics, such as "rest." And only in the 7th century were typical Sabbath restrictions for the first time linked to Sunday.

Harline thus raises the ancient question of: what is the precise relationship of the Jewish Sabbath to the Christian Sunday? To believers at present, centuries removed from those old developments, the relationship seems clear but it wasn't so until after A.D. 600. Previously, Sunday was meant to have a different character from the restrictive Sabbath in Jewish traditions.

The rest of the book reads like a novel, replete with concrete examples of people's experiences and myriads of anecdotes, carefully vested in thorough research. The reading is made particularly pleasant by a semi-literary, conversational style, with all the bibliographical notes ordered per subchapter at the end of the book.

Chapter 2 deals with the Middle Ages, set in England around 1300. By now the rules of the Christian Sunday were clear: it was to be a full day free of work, with worship and rest. The question was: did "resting" simply mean no work, or did it also include play? Almost all Christians showed by their actions that Sunday rest in fact included, after services, a lot of recreation.

Chapter 3 takes us to the Dutch Republic in 1624, where Harline describes daily life and Sunday observance from the journal of Reformed schoolteacher David Beck. Same pattern: we learn that, overall, Sunday had developed into a day free of labor, but still open to a lot of amusement, once the church service was over. Less so in England, where the Puritans were pushing their vision of a strict Sunday, with long church meetings, without any other activity, except those related to religion. More than any other group, the Puritans authored the tradition that play on Sunday was wrong; "rest" meant soberly pondering one's salvation and engaging in charitable activities, not laughter or traditional "fun."