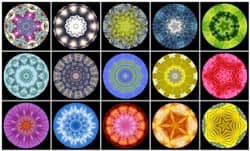 Have you ever held a kaleidoscope up to the light, turning it this way and that, for the sheer pleasure of the beauty it brings -- when suddenly, to your startled delight, the pieces fall into place, and you see a pattern that you've never seen before, one that makes sense?

I do that with the Wheel of the Year.

This particular kaleidoscope has long been my favorite toy. Again and again, I return to the Wheel of the Year, not only for the shifting beauty of Nature as seen through its moving prism, but because nothing else grounds our existence on this planet so completely, and nothing else can equal the comfort of its never-ceasing lessons of renewal. Yet every now and then, as I hold the Wheel up for inspection, gently turning it, a pattern will suddenly show itself, one that I fancy has gone unnoticed until now. This happened once before with my seasonal interpretation of The Death of Llew. And now it appears it has happened once again.

This "discovery" may not be as flashy as my reinterpretation of the Fourth Branch of the Mabinogi, but it has a subtle charm all its own. Also, whereas my former essay tended to appeal mostly to specialists in Celtic mythology, this one is equally accessible to the generalist. It is based on a succession of folk customs connected with each of the holidays on the waxing side of the year. And while I lack specific analogous folk practices from the waning side of the year, I believe at least one other folk belief about the calendar will shed enough light to bring the Circle to a close.

With one exception, all these folk customs were mentioned in my previous essays on the Pagan holidays, and have been sitting there patiently waiting for me to notice their pattern for over 15 years! Consequently, it seems easiest to quote the significant passages from those earlier articles, following each with a comment on why it helps create the pattern. In this way, we can see how the Circle is born, how is expands, and how it reaches its final limit.

"Ultimately, of course, the holiday is rooted deeply in the cycle of the year. It is the Winter Solstice that is being celebrated, seed-time of the year, the longest night and shortest day. It is the birthday of the new Sun King, the Son of God -- by whatever name you choose to call him. On this darkest of nights, the Goddess becomes the Great Mother and once again gives birth. And it makes perfect poetic sense that on the longest night of the winter, 'the dark night of our souls', there springs the new spark of hope, the Sacred Fire, the Light of the World, the Coel Coeth." At the Winter Solstice, the Circle is not yet a Circle; it is a Point. Specifically, it is the point at which spiritual energy manifests itself into the physical world. It is the divine spark, the sacred seed, the single cell, the incarnation, the universe in a mustard seed. In some ways, the Point is more inclusive than the Circle, since the Circle always implies a boundary, and a separation of that which is outside from that which is inside. The Point, however, can symbolize the All. At the Winter Solstice, we bless and purify this tiny dust-mote of Being, this Birth of the Circle, which is also All That Is. The Circle Is A Point.

"Catholics will be reminded that the following day, St. Blaise's Day, is remembered for using the newly-blessed candles to bless the throats of parishioners, keeping them from colds, flu, sore throats, etc." This blessing of the throats is, by extension, a cleansing and purifying of the physical body. The Circle of protection has expanded to include this "vehicle" of the spirit that first manifested itself at the Winter Solstice. Interestingly, an old Pagan tradition is that the "spirit" or "soul" does not complete the process of "entering" the body until a person reaches puberty, at which point it is finally "locked in" (which may explain why young children always seem a bit Elfin, with one foot still in the Other World). And Candlemas, or Imbolc, has long been associated with initiations into the Craft, which traditionally cannot take place until puberty. Even the "position" of Candlemas on the Wheel of the Year, at the North-East, is the point of the Circle at which a "gate" is cut to admit a new initiate, whose body is then blessed and anointed. This blessing is a warding, a shielding, a "seining" of protection for one's physical body, to keep it safe from all danger and disease. So at Candlemas, we bless and purify the physical body, the temple of the spirit. The Circle Widens To Include Your Body.