The Good Wife: Hurry Up and Wait

Matthue Roth worked on the set of the new CBS drama The Good Wife as an extra, and first blogged about it here. The episode, "Unorthodox," is about the Hasidic Jewish community in Chicago. It aired on Tuesday, Nov. 10 at 10 EDT.

The Good Wife takes place in Chicago -- fictionally, anyway. There are three Hasidic synagogues in Chicago that I can think of, having lived there for a year, but even the mostly-Jewish neighborhood, West Rodgers Park, is scarcely a hotbed of Hasidic culture like they're portraying it today, with dozens of Hasidic families swarming down the streets. And they definitely don't live in the stately downtown brownstones that we're filming in front of today.

It's kind of bizarre, but it's also kind of flattering. I mean, over the course of the day I will listen to Julianna Margulies inquiring again and again about the meaning of an eruv. Up-and-coming actors are dressed in the cultural garb of my people. What's not to like? They bring us out to the street where they're filming. Fake props abound: clip-on payos (for kids and adults), fake beards, strollers packed with plastic kids. It's particularly disorienting to hear a bunch of ten-year-olds, all payos-and-yarmulked up, talking about the Wii games that they want for Christmas. But, in a way, it's kind of nice to not get stared at by everyone on the street for the way I look. Or, at least, that the staring is divided up between me and all the fake Hasidim.

We are told to wait. I know about this part because everyone's told me that this is the cardinal rule of being an extra: "Hurry up and wait." In a fit of nervousness, I asked my token Hollywood-star friend Mayim Bialik for advice before the filming. She starred on a TV show in the '80s, but more recently has recurring roles on Curb Your Enthusiasm and The Secret Life of the American Teenager. She told me two things to remember:

1) Expect a lot of waiting (unrelated to your being Hasidic, just that's what it may be like), and

2) Expect to be poorly treated (ditto)

She also told me: "People may ask you random questions, and you are representing all of us, Hasidic and not, so do us proud!"

A production assistant grabbed my shoulder and started steering me down the street. He grouped me with two other Hasidim (the real ones, that is) and told us, when they called action, we were supposed to walk down the street. 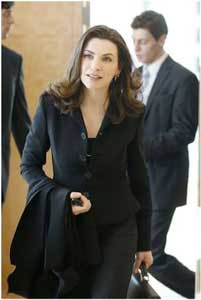 I looked down the street. There, for the first time that day, I catch sight of Julianna Margulies. She's standing in front of the crane, inhaling wisps of coffee and talking to the other principal cast member there, Archie Panjabi. The director is telling them about the scene. I edge closer to the curb until I'm able to overhear, a process which causes several other extras to look at me like I'm crazy, but they do this for a living. They're used to it.

There's a tiny moment of disappointment in my chest. I was hoping for big spoilers. Juicy spoilers. Or possibly a moment where Ms. Margulies makes eye contact with me, something passionate and familiar is sighted, and she decides that the show needs a recurring Hasidic character. In this moment, I realize that walking down the street with two other long-coated dudes, as badass as we look, will probably not make that happen.

Not that it matters. That's not what I'm here for. I'm here to represent my people positively, and to look good. "Action!" the PA calls. We fall into step.