The Myths of Christmas

Here is a true-false quiz:

How did you do on the quiz? The answers are included in the rest of this article. 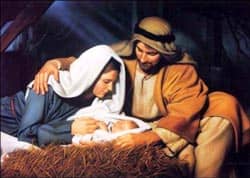 Marcus Borg, a member of the liberal Jesus Seminar, claims that the Gospels are in serious conflict: Jesus was born "in a stable" in Luke but in a home in Matthew (The Meaning of Jesus: Two Visions, p. 180). As it turns out, this isn't really a conflict at all. Contrary to the traditional Christmas story, Jesus was indeed born in a home! Borg's claim is based on the notable King James Version's mistranslation of Luke 2:7: "there was no room for them in the inn." But the KJV rendering goes against Luke's intention.

Over the centuries, the Christmas story has been re-cast and romanticized into a kind of Christian "mythology." But what do the scriptures really tell us about Jesus' birth?

1. There would have been no inns in a backwater town like Bethlehem. They would be found along main roads or in cities.

2. The word for inn (katalyma) is the same word rendered "guest room (of a private home)" in Mark 14:14 and Luke 22:11 -- referring to the room where the last supper was eaten.  The word in Luke 2:7 ("guest room") is different from the word used for "inn" (pandocheion) in Luke 10:34, where the beaten man was taken by the compassionate Samaritan. This inn had an innkeeper (pandocheus), and such inns would certainly be located on a main thoroughfare between Jerusalem and Jericho. One commentary on the Luke birth narrative puts it thus: "The traditional picture of a surly innkeeper refusing admission to the needy couple is somewhat dubious" (I. Howard Marshall, "Luke," in The New Bible Commentary: 21st Century Edition, p. 984).

3. Joseph, as a considerate husband (see Matthew 1:19), would have taken ample time to find Mary a place to give birth, which is what Luke 2:6 indicates: "While they were there [in Bethlehem], the days were completed for her to give birth." Mary gave birth after she had "fulfilled her days" -- a duration of time. Although people seem to miss this, the passage clearly indicates ample passage of time in Bethlehem before the birth of Jesus.

4. In a culture that so valued hospitality, Joseph would have insulted his relatives by going to an inn. He would stay with his relations, who would readily have made room for his expectant wife -- even if the guest room was crowded and the birth had to take place in the main living area. It would seem ludicrous, given the importance of hospitality in the Middle East, that Joseph would have no place to stay among his relatives -- especially if he was "of the house and line of David" and if his wife was expecting. And if Joseph could not find a place for Mary after a few weeks or so, they could have gone back to Mary's relative Elizabeth, who lived in the same region.

5. In Jesus' day, animal sheds were typically attached to houses. In Palestine a manger was not normally found in a separate stable; rather, it was "in the main living room of a peasant house, where animals are brought in at night" (R.T. France, The Evidence for Jesus, p. 159). New Testament scholar Kenneth Bailey notes that the manger in which Christ was laid was "built into the floor of the raised terrace of the peasant home" (Kenneth Bailey, "The Manger and the Inn: The Cultural Background of Luke 2:7," Evangelical Review of Theology). This stall-next-to-the-house arrangement is what Luke 13:15 presupposes:  ". . . does not each of you on the Sabbath untie his ox or his donkey from the stall and lead him away to water him?"

6. When the wise men show up in Bethlehem, they come to a house. Matthew 2:11 states: "After coming into the house they saw the Child with Mary His mother; and they fell to the ground and worshiped Him. Then, opening their treasures, they presented to Him gifts of gold, frankincense, and myrrh."

These gifts are emphasized as the fulfillment of what the Old Testament scriptures anticipated. A new covenant was in the making -- one involving Gentiles (see Zechariah 14:16). So when the Gentile wise men/magi come from afar to visit the newly born king Jesus, they bring gifts of gold, frankincense, and myrrh. Of course, there were probably other gifts, but these are highlighted because of certain Old Testament references anticipating the coming in of the Gentiles to worship the true God and to honor his Messiah/King.