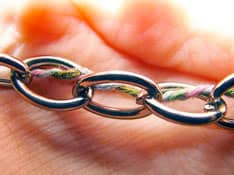 The third annual interfaith Passover Seder meal at University Congregational Church in Seattle was a "bring your own wine" event. Tables for 300 guests were impeccably set with goblets and fresh flowers; two kinds of charoset (a pasty blend of fruit and nuts prepared according to both the Ashkenazi and Sephardic styles); two kinds of horseradish (raw and sauced); and baskets of matzo. The tables buzzed with lively conversation.

Rabbi Ted Falcon stood at the front with a guitar player and two singers. He is a trim, white-bearded man who is constantly making jokes, but he also has an air of underlying seriousness, intensity, even melancholy.

"OK," he said. "We'll begin on page 22 of your handout." After two days of watching Falcon lead services, I had learned that he never begins on page one. He is likely to start on page 22, continue on page 11 and move on to page two.

"The Haggadah takes us on a spiritual journey," he says. "We learn to be freed from our inner pharaohs, travel in our wilderness and form our own dreams of the Promised Land."

The participants at this event -- which sold out three weeks before -- were Jews, Christians, and Muslims. Many came from Bet Alef, Falcon's "meditative synagogue" that meets in one of Seattle's suburbs. Some belonged to University Congregational Church, which was led by Pastor Don Mackenzie until his retirement in June. Others belonged to an experimental congregation led by Sufi Muslim teacher Jamal Rahman and known as the Interfaith Community Church. (Rahman calls it a church, he says, for "lack of a better term"; it's for people who meet on Sundays to explore their "spiritual paths" together, he explains.)

Falcon not only invited members of these three congregations to the Seder but asked Mackenzie and Rahman to speak. And Falcon didn't want generic spirituality talk from them; he wanted Mackenzie to mention Jesus or Paul and Rahman to refer to Muhammad and the Qur'an.

This kind of interfaith gathering is an increasingly common phenomenon across the U.S. Interaction between people of different faiths is hardly new, but a qualitative shift occurred after September 11, 2001, says Kathryn Lohre, assistant director of Harvard University's Pluralism Project. "There was a strong interfaith resurgence, driven by the desire of many people, perhaps Christians especially, to get to know their religious neighbors."

Lohre says grassroots efforts have sprung up in many places. The old-style interfaith roundtables in which academics or religious leaders gathered to discuss their theological differences in formal meetings have given way to more informal efforts. These are often led or developed by laypeople, as in the case of the Interfaith Youth Core in Chicago, the Faith House in Manhattan, Women Transcending Boundaries in Syracuse and Daughters of Abraham in Detroit. People meet to take part in service projects, talk about family, share holiday celebrations or eat ethnic food.

For Rabbi Ted Falcon, Pastor Don Mackenzie, and Brother Jamal Rahman, formal and informal meetings have led to deep friendships. They call themselves the Three Interfaith Amigos. The three men host the Interfaith Talk Radio show in Seattle, meet weekly for mutual spiritual direction, and have embarked on writing a book together. Not only has their friendship grown over the years, but their congregations have become closer. A member of Falcon's synagogue leads the Gregorian chant group at Rahman's congregation. A meeting at any of the three congregations will likely include members of the other two.

"When we first started, the three of us were like three circles touching," Falcon says. "But over time, our circles have become more interlocked. We are still distinct circles, but we share more and more together."

In Seattle, the work of the Three Amigos has spawned the Northwest Interfaith Community Outreach, led by business executive John Hale. This organization helps to sponsor interfaith events and encourages what it calls interspiritual communication. Hale has a salesperson's easy smile and ready handshake -- he seems like a man who would be comfortable in a corporate boardroom. So it was a little surprising and even unsettling to hear him speak the language of contemporary spirituality. Raised as a Presbyterian, Hale says that his upbringing "lacked nourishment," a nourishment he didn't find until he converted to Catholicism and discovered interfaith work.

For Hale, interfaith work involves both a conversation and a way of life. "It is heart work," he says, "not head work." The image that Hale likes -- adapted from Meister Eckhart -- is that each faith is a house with a basement. Deep in the basement is a trap door. If you go deep enough, you fall through the trap door into the shared river that flows beneath all faiths, the source of them all.