When Money Is Worthless, What Next? 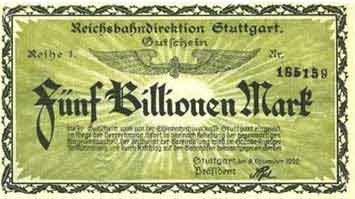 I understand that inflation is one of the effects of supply and demand; increasing the supply of money in an economy lowers demand for it, making it less valuable. Zimbabwe's economy has taken that to an extreme, with an estimated inflation rate of 90 sextillion percent.

I can't even wrap my mind around that number. It dwarfs inflation in Weimar's Germany, which was a mere 850 billion percent and made wheelbarrows much more practical than wallets, at least for citizens that didn't have five-billion mark notes kicking around and needed to buy a loaf of bread or two.

So when so much money has been printed that it becomes effectively worthless, what can be done? Is there a restart button that can be pushed? I know that other countries have devalued their own currency, effectively doing the opposite of printing more money by requiring people to exchange their existing cash for bills that actually have a value, but what I can't figure out is how people function in a country where money really has no meaning.

If I have no money, I'm poor. I can't buy the things that my friends and neighbors can. I will either do without, or people will give me things (goods or money), or I will find a way to earn more (converting my mental, physical, or spiritual energy into a form that I can convert into goods and services). But what if my friends, neighbors, and government are all poor as well? What happens if no one has any money to give me, and the work I can find doesn't pay me enough to buy a cup of rice to feed my six children?

While the experts debate the economic realities of hyperinflation, I wonder if a metaphysical approach would be more or less helpful. The value of money is officially tied to something so that we can negotiate price and value. The United States has tied its own currency to gold, silver, and . . . whatever it's tied to these days. But the only thing that money is actually linked to is the effort it takes to create the value behind it, right? For instance:

The people of Zimbabwe still exist, they still farm, they still have strong bodies and sharp minds with which to create goods and services of lasting value. Their currency is worthless, but they are not. I can only draw two conclusions from this:

1) Money has failed to serve a useful purpose and is now no more useful than the proverbial ice cubes for Eskimos.

2) The continuing existence of money in Zimbabwe is distracting from the fundamental truth that all value assigned by humans is based on human desire and need.

If I start seeing numbers printed on my money that I don't have names for, I'm signing up for a time bank. After all, I was taught not to invest in anything I don't understand, and in Zimbabwe at least, I don't even understand money. To put it in Pagan terms, money there has left the realm of Earth to exist entirely as Air -- a real imbalance.

Terence Ward's blog, Pagan Filter, can be found at http://www.paganworldview.blogspot.com/.