A Glimpse of Mortality

The final spirit to visit Ebenezer Scrooge is the "Ghost of Christmas Yet To Come" or simply the "Ghost of the Future." This silent spirit, shrouded in black, takes the mythic form of death. Not surprisingly, the visions it reveals to Scrooge also focus upon death and its meaning.

The largest portion of Stave 4, which is shorter than Staves 2 and 3, has to do with various reactions to the death of some unknown figure. At first several men of business talk about this man's death with curious indifference. Then Scrooge observes three people who robbed the dead man and are selling their booty in a creepy part of town. Of course the reader guesses that the deceased victim is none other than Scrooge himself, but this doesn't occur to Scrooge at this stage in the story. In fact, when he stands next to the covered body of the dead man, Scrooge is unable to lift the covering and discover whose body lies beneath it. He just can't bring himself to face his own mortality.

The most touching scene in Stave 4 involves the Cratchit family, minus Tiny Tim, who has just died. Their shared grief is almost tangible as they try nevertheless to enjoy a bit of Christmas cheer. Nevertheless, Bob Cratchit breaks down with sadness, crying out "My little child!" Before Scrooge leaves the Cratchits, the family members resolve never to forget Tiny Tim, whom the narrator addresses: "Spirit of Tiny Tim, thy childish essence was from God."

In the final scene of this stave, Scrooge demands that the spirit reveal the identity of the mysterious dead man. Soon Scrooge stands in a deserted graveyard, directed by the spirit's pointing finger to a neglected grave, the stone of which reads "Ebenezer Scrooge." The horrified Scrooge realizes the sum total of his life, which amounts to zero. He will die unloved and unnoticed, unless he chooses a different course of living from that moment on.

And this is exactly what Scrooge resolves to do, even though the spirit refuses to assure him that his life is redeemable:

"Spirit!" he cried, tight clutching at its robe, "hear me! I am not the man I was. I will not be the man I must have been but for this intercourse. Why show me this, if I am past all hope?"

"I will honor Christmas in my heart, and try to keep it all the year. I will live in the Past, the Present, and the Future. The Spirits of all Three shall strive within me. I will not shut out the lessons that they teach. Oh, tell me I may sponge away the writing on this stone!"

Yet the spirit doesn't speak, and, as Scrooge attempts to hold him, the spirit turns into a bedpost, Scrooge's own bedpost.

One might wonder why Dickens associates the Ghost of Christmas Yet To Come with death. Michael Hearn, in The Annotated Christmas Carol, cites something Dickens wrote eight years after A Christmas Carol was first published:

Of all days in the year, we will turn our faces towards that City upon Christmas Day, and from its silent hosts bring those we loved, among us.

City of the Dead, in the blessed name wherein we are gathered together at this time, and in the Presence that is here among us according to the promise, we will receive, and not dismiss, they people who are dear to us! (Hearn, p. 126)
Article Continued On Next Page
Page: 1 of 2
12/22/2009 5:00:00 AM
more at patheos
1

"So Your Problem with Christianity is the Jesus Parts?"
Libby Anne
2 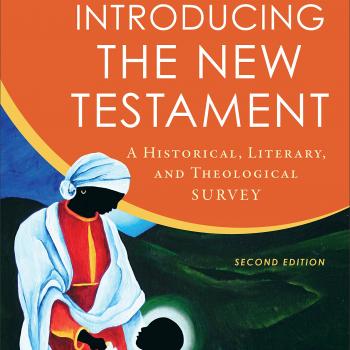 Technological Epiphanies
Michael Paulus
Get Patheos Newsletters
Get the latest from Patheos by signing up for our newsletters. Try our 3 most popular, or select from our huge collection of unique and thought-provoking newsletters.
From time to time you will also receive Special Offers from our partners that help us make this content free for you. You can opt out of these offers at any time.
see our full list of newsletters
Editor's picks See all columnists