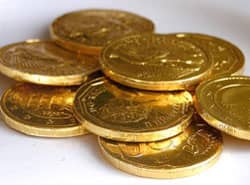 Chanukkah gelt, chocolates wrapped up in the shape of coins, reminds us each year of the importance of digging deeper into our pockets and giving to others in need. It is not accidental that we feel this imperative during the holiday season, as it is in a section of the Torah dealing with the Jewish holidays that we reiterate the commandment of giving:

If there is a poor man among your brothers in any of the towns of the land that the Lord your G-d is giving you, do not be hardhearted or tight-fisted toward your poor brother. Rather, be open-handed and freely lend him sufficient for his need in that which he lacks (Deuteronomy 15:7-8).

It is thus during the holiday season that this reminder to be "open-handed" is all the more pertinent. How can we celebrate with family and friends, enjoying festive meals and gift-giving, while being sure not to neglect those in need? How can we keep the stranger, orphan, and widow (the biblical paradigms for the most vulnerable in society) at the forefront of our consciousness while we take a rest from our normal routines and rejoice in our life's pleasures?

The imperative for Jews to give of their wealth to others in need is called tzedakah. Although the word "tzedakah" is often translated as "charity," a more literal and appropriate translation is "justice."  Whereas charity is derived from the Latin word caritas, meaning love, tzedakah as an obligatory act of justice has moral implications. Jews are commanded not to give only to those they love or at times when they feel moved, but rather to be proactive to perpetuate justice in the world. In the book of Genesis, when Abraham, the first Jew, was called upon to form this nation he was given the charge "Laasot tzedakah u'mishpat" -- to do what is right and just in both distributive and procedural justice (tzedakah u'mishpat). We are to do what is right and just to secure the rights of the vulnerable and through the redistribution of wealth.

Tzedakah is, in fact, considered to be one of the most important of all the mitzvoth (commandments), as both an ethical and spiritual imperative. The rabbis taught that when a pauper approaches in a time of need, the approached should see the divine presence resting alongside the pauper. In a world where 2 of 6 billion people live on $2 a day and 1 billion live on $1 a day, how important it is for us see G-d resting with those in need! How urgently all people of faith and conscience must respond in sustainable and systemic ways to alleviate poverty!

But there is a limit to how much one gives, and the Jewish tradition is predominantly not an ascetic religion. While there are restrictions upon consumption, sexual relations, and Shabbat to name only a few, Jewish law does not shun permitted physical pleasure or the acquisition of wealth. Rather, we elevate the use of our resources to the level of religious obligation. While traditional Jewish liturgy includes a request for prosperity, Jewish law regulates how we distribute our wealth, stating that we must give back to those less fortunate than ourselves (at least 10% and some say at most 20%).

And there are even more ways to give than just money of course. Rabbi Moshe Feinstein, a great 20th-century Jewish legal authority, suggested that one also strive to give 10% of one's time in service. Sometimes one's hands and hearts have a greater impact than one's dollars. However giving 10% to those in need from each and every paycheck is made a floor and not a ceiling when the need is pressing. Nachmanides, the great 13th-century Spanish Jewish legal authority, argued that when a person is "drowning in the river," a bystander must give all of his or her resources to save that person. The Jewish tradition emphasizes that in times of distress, such as these economic times, more is asked of us. While it may only be in a direct pikuakh nefesh case (life-threatening case) that one would go to this extreme, certainly the consistent urgency of global, domestic, and local poverty can remind us to give beyond our initial comfort zone.

While the rabbis wanted to ensure that the proper quantities of tzedakah were given, they also considered the humanity of the individuals involved. Protecting the receiver's dignity and avoiding humiliation was of utmost importance in both times of sadness and times of celebration. Thus the rabbis ruled that even the richest must be buried in plain garments so as not to shame the poor. On certain festive days, girls, especially those from wealthy families, had to wear borrowed clothes in order not to shame those who were not of means. The rabbis intervened to lower the prices of religious necessities so that no one would be excluded from communal rituals. Some rabbis even forbade the serving of meat at communal celebrations since some could not afford to offer the same celebrations when it was their turn to host.