A Contemplative Christmas: Terrors and Wonders

This is the fifth in a series of Advent reflections by Jan Richardson that will be available at the Mainline Protestant Portal at Patheos in the coming weeks. 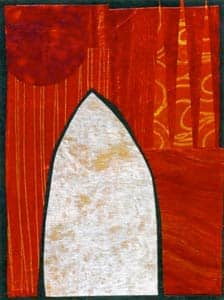 Some years before I met him, my sweetheart, Garrison Doles, starred in a horror film. Shot here in Central Florida, Jack-O is a real classic of the drive-in, B-movie genre, complete with a low budget, no rehearsals, and scenes shot in one take. The movie featured a jack-o-lantern-headed demon disturbed from his grave (by unwitting teenagers, as ever) who then (after dispatching the teenagers) seeks his revenge upon the descendants of the man who had killed him. The movie also featured John Carradine, the famed actor who in his later years became a mainstay in horror films. Through the miracle of technology, the fact that he'd been dead for nearly a decade didn't diminish his performance.

I'm not a big fan of the horror genre, but of course I had to see this one. I'm happy to report that my sweetheart saves the day, the demon is vanquished, and the townspeople return to their normal lives, freed from the specter of a scythe-wielding, pumpkin-headed fiend.

I find myself curious about what it is that draws people into scenarios designed to scare them. For some folks, there's clearly something compelling about entering a space in which the darker realities of life are so intensely magnified yet also reduced to the manageable size of a movie screen. And I imagine that's one aspect of the appeal: that amid the known terrors of the world, a horror film offers us an opportunity to have some control over how we encounter our fears.

Fascination with fear isn't a new phenomenon, of course. In the Middle Ages, some of the most vivid and enduring works of art are those depicting hell and its torments. The artists' renderings of the underworld -- as, for instance, in this painting of a hell-mouth in the 15th-century Hours of Catherine of Cleves or in the works of Hieronymous Bosch -- tend to be far more visually interesting and gripping than their depictions of heaven.

Horror movies weren't the first thing that came to mind as I read the gospel lection for this week. Yet I found myself thinking about them as I wrestled with the text, which is one of the more challenging ones that Advent gives to us. On the one hand, I am quite taken by John the Baptist, this man who so devotes his life to preparing the way for Christ, his own cousin. John has many opportunities to claim status and power for himself -- as in this very text, when people are wondering who he is and are prepared to believe he is the Messiah. It seems, however, that any pretensions or yearning for power John may have ever had have been worn away by his life of prayer in the wilderness. The baptizer studiously resists taking on any power or identity that does not belong to him.

Meanwhile, on my other hand, I am uneasy with this man who calls his listeners a brood of vipers, and I wonder about this crowd that is so willing to listen to a preacher who speaks to them in this way. Beyond the matter of John's name-calling, I find myself wondering: what draws them to this wild-eyed prophet who speaks -- probably yells -- such fearsome visions of fire and brimstone, axes and roots, winnowing forks and threshing floors?

It's tempting to think that at least some of those among the crowds have sought out John for the spectacle of it: that the same kind of thing that draws 21st-century people to terrifying visions on the silver screen drew crowds into the wilderness for the 1st-century's version of graphic, high-def, full-throttle, give-you-the-willies cataclysmic fare.

It is perhaps tempting, too, to think that when the crowd asks, "What should we do?" it sounds less like an authentic question and more like the helpless, hand-wringing query of a character in one of those horror films -- and you know there's no real point in their asking what they should do, because no matter what you holler at the screen, they're going to open that door, or go into those woods, or accept that ride from a stranger.

The drama, the intensity, the sensation and sensationalism of John the Baptist's words and their power to stir the crowd: this is compelling and disturbing stuff. Ultimately, however, what John the Baptist gives to his hearers goes far beyond sensationalism. Wherever their question comes from, whatever has impelled them to ask what they should do, John gives them an answer that, if they heed it, if they take it on as their own, will change them utterly.