The Ghost of Christmas Past: Scrooge Witnesses Love 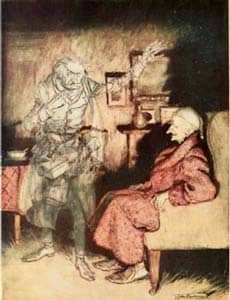 In Part Five of the series I began to examine A Christmas Carol to discover why Ebenezer Scrooge changed so dramatically. I showed that we see the tiniest hint of his transformation in his interaction with the ghost of Jacob Marley, whose graciousness to Scrooge elicited a morsel of gratitude from the old miser. Yet Marley's impact would be most keenly felt, not in his visit, but in his sending three other spirits to "haunt" Scrooge.

The Impact of the Ghost of Christmas Past

The Ghost of Christmas Past is a strange apparition who explains the purpose of his visit as Scrooge's "welfare," or, indeed, his "reclamation." The spirit begins by magically transporting Scrooge to the place where he spent his boyhood. The sights and sounds of his youth begin to soften Scrooge's heart. Yet the spirit has only begun his transforming effort.

Next Scrooge sees his fellow students merrily on their way to celebrate Christmas. The school is deserted, all except for one boy, "a solitary child, neglected by his friends." It is Scrooge, of course, left alone with nothing to cheer him but the characters from his beloved books. The old man weeps bitter tears for the child he once was. For the first time in a long time he feels compassion for someone else, even if that "someone else" is really just an earlier version of himself. Yet as he feels for himself as a boy, Scrooge also shows the first glimmer of care for another human being as well: "There was a boy singing a Christmas Carol at my door last night," he explains to the ghost. "I should like to have given him something: that's all." Ironically, Scrooge had almost given that boy something -- a rap with his ruler!

On some Christmas Eve following the time of his isolation in the school, the young Scrooge receives a visit from Fan, his beloved sister. (Dickens himself had a sister named Fan.) Fan informs Ebenezer that he can come home for Christmas. Years later Fan dies, leaving behind a child -- the nephew Fred who Scrooge had so badly mistreated only hours before.

After this tender family scene, the Ghost of Christmas Past takes Scrooge to the warehouse of Old Fezziwig, to whom Scrooge had once been apprenticed. The mere sight of his generous old master brings joy to Scrooge's heart. Then, as he witnesses a grand Christmas party, "Scrooge had acted like a man out of his wits. His heart and soul were in the scene..." When challenged by the ghost, he defends Fezziwig's generosity. And, once again, this begins to be translated into a desire to be generous in his own life: "I should like to be able to say a word or two to my clerk just now," Scrooge says.

The next scene is not a happy one for Scrooge. He watches as his fiancée Belle breaks their engagement, recognizing that Ebenezer loves money far more than he loves her. Then the ghost shows Scrooge one more scene, in which Belle is much older, with a husband and daughter. Their family love stands in stark contrast to Scrooge's own miserly loneliness. At this, Scrooge begs to be removed. "I cannot bear it!" he exclaims.

How does all of this help to transform the heart of Ebenezer Scrooge?

His journey starts at a most curious place, with Scrooge looking upon himself as a lonely child. It's as if Dickens realizes that even hard-hearted people might have the tiniest soft spot for themselves and their own suffering. One might almost be tempted to say that Scrooge is acting out a sort of psychological Golden Rule, loving himself so that he might love others as well. From a psychotherapeutic angle, Scrooge is getting in touch with his inner child.

The vision of the Fezziwigs' party not only lures Mr. Scrooge into a bit of vicarious celebration, but also it forces him to reexamine his own values. Mr. Fezziwig, whom the old Scrooge continues to hold in high regard, saw fit to spend a bit of money for the sake of others. "The happiness he gives," Scrooge insists, "is quite as great as if it cost a fortune." There's more to life than money, the old miser begins to realize, for the first time in a long time.

The Ghost of Christmas past, beyond conjuring up within Scrooge feelings of nostalgia and celebration, helps him see -- and feel -- the harsh contrast between love and loneliness. Love figures prominently in his boyhood encounter with his sister Fan. Remembering her love for him -- and his for her -- makes Scrooge's grouchy rejection of Fan's son Fred all the more grievous. Moreover, the scenes featuring Belle press into Scrooge's heart the lack of love in his own life. Where Scrooge had once felt genuine love (from and for Fan, from and for Belle), he had chosen to cut himself off from this love, whether with his former fiancée, or with Fred. He realizes he has made poor choices for his life, and he starts to wish for something better.