Greed is Bad, Wealth is Wonderful 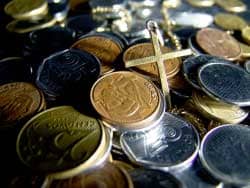 Greed is bad....and so are oversimplifications.

I lived in the far east during the 1990s, when whole societies were uplifted as freer (albeit very imperfect) markets began flourishing. Men and women secured better jobs, enjoyed opportunities to use their God-given talents, provided better education and healthcare for their children, and transformed large swaths of east Asia for the better. Economists have estimated, for example, that some 300 million people were lifted from poverty in China over the last two decades. The "Asian economic miracle" resulted from a wide range of factors, including Adam Smith's so-called "invisible hand." That is, when self-interested men and women strive to better their lives in well-functioning economies, abundance is generated and whole communities typically benefit.

I lived in the far east during the 1990s, when men sold children as sex slaves, treated factory workers less humanely than their pets, knowingly sold defective products that killed customers, despoiled the environment, or wallowed ostentatiously in opulent mansions while beggars starved to death outside their gates.

Such outrages are hardly confined to Asia, of course, as plenty of now-broke Americans could testify, victimized by Bernie Madoff's lies or by negligent financial industry executives who apparently cared more about bolstering their own short-term income than about serving their shareholders' long term interests.

However perceptively Adam Smith dissected the market economy, his suppositions about human nature now seem laughably idealistic. He imagined, for example, that outrages like the aforementioned were unlikely to occur, because, "How selfish soever man may be supposed, there are evidently some principles in his nature, which interest him in the fortunes of others, and render their happiness necessary to him, though he derives nothing from it, except the pleasure of seeing it." That language seems arcane in the 21st century; unfortunately, so does the sentiment.

What are we religious believers to make of the business of business, which generates both the extraordinary abundance that enables dignified livelihoods and the outrageously greedy, amoral behavior that brings misery upon millions? Most adults spend most of their waking hours making money. We believers need a more robust, faith-led spirituality and theology of work, money-making, and money-use, our most pervasive human activities.

Anyone who thinks their work is “just a job” or “it’s only about the money,” needs an attitude adjustment: you’re collaborating with God in building the earth.

A couple of principles from my own Catholic tradition might figure into a broader spirituality of work and money-making:

1. Work and wealth-generation are privileged activities. The Catholic Cathechism reminds us that, "by means of his labor, man participates in the work of creation." Anyone who thinks their work is "just a job" or "it's only about the money," needs an attitude adjustment: you're collaborating with God in building the earth.

Entrepreneurs, businesspeople, construction workers, investment managers, and even mortgage-bankers are continuing the work of creation by generating the abundance of jobs, products, services, and income that are essential to dignified living conditions. With that privilege, of course, comes an invitation to reflect: is the world I'm co-creating with God consistent with God's plan for humanity?

2. The world we're creating is, ultimately, not the possession of any one person, company, country, or generation. Hence, solidarity is essential to how we make and use money. Solidarity is not merely "feeling bad" that some people are poor, but as the Catholic Catechism puts it, "a firm and persevering determination to commit oneself to the common good." Put more plainly, "The right to have a share of earthly goods sufficient for oneself and one's family belongs to everyone," and "we are obliged to come to the relief of the poor and to do so not merely out of our superfluous goods." Such notions are provocative nowadays when fundamentalist versions of Adam Smith's ideas, pumped up with the steroids of economic Darwinism, scold us from guiding the "invisible hand," and absolve us from agonizing over the human fallout from our economic choice-making.

Greed is bad. So is the assumption that business is bad because it is driven by self-interested individuals and investors. So is the assumption that we humans have to submit to, much less glory in, economic Darwinism. We religious believers ought to follow the example of Jesus: more of his parables refer to work and money than to prayer or dogma. We need more discussion of the complexities of money, its glories and abuses, in school religion classes, from pulpits, and from our shepherds. For us believers, it's not merely a question of following the commandment not to steal; rather, it's a question of asking ourselves and our generation: am I creating an abundant, just world animated by solidarity?

Chris Lowney, formerly a Jesuit seminarian, later served as a Managing Director for JP Morgan & Co in New York, Tokyo, Singapore, and London. He is the author of Heroic Leadership: Best Practices from a 450-Year-Old Company that Changed the World and Heroic Living. Visit his site at www.chrislowney.com.