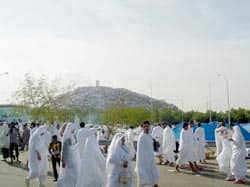 Our journey began with the intention of ihram: "I've made my skin, my hair, and my nails sacred for You, Allah." I had prayed to be enveloped by enough light to lead me all the way to Mecca from my bedroom in hilly Amman, Jordan. Qibla-bound, we first stopped in Jeddah. I tried to remain indifferent to the lavishness of the glitzy port-city. Instead, I was excited by the prospect of completing umrah under the clear, starry nights of Mecca.

This has long been a fantasy of mine. I hoped that we would arrive in Mecca after midnight so that we could perform tawaf in the cool, crisp night air when anxiety-inducing concepts such as "late" and "early" do not exist. Despite delay after delay in our journey, we piled onto a bus and left Jeddah by midnight, destined for Mecca. We recited resoundingly into the darkness of the age-old city, "Labayka Allahumma labayak! Labayka la sharika laka labayk!" ("I answer your call, O God, I answer your call!"). This was the very call that Abraham, the Father of the Prophets, was asked to make. I felt proud to be fulfilling this ancient duty.

In the back of the bus, my mom and aunts were laughing and giggling loudly, much to the annoyance of most of the solemn hajjis around us, but I thanked God for my mother's laughter and I thanked Him for enabling me to go on this journey with my family. Despite being mahram-less, I felt safe in the company of six mothers, mothers that shroud their children in the same warmth and safety Hajar offered her baby, Ismail.

The entrance to Mecca was, admittedly, somewhat disenchanting. I used to scoff at the infinite number of McDonald's restaurants located at every exit on the Virginia Turnpike. Here, in the birthplace of Islam, it was no different. The "Entering Mecca -- Muslims Only" sign, signaling a gateway into a sacred land, was also a gateway to scores of fast-food chains and window dressings of scantily-clad mannequins. This seemed oddly paradoxical. I secretly thought that if I were the Amir(a) of Mecca, I would only allow local, specialized restaurants to open here and would ban the advertisements of silly, obscene polyester clothing which greeted pilgrims as they entered. I would insist that pilgrim mascots greet pilgrims at the gates of the city.

Having booked our accommodations late, the hotel we managed to find wasn't exactly the type that left you a mint on your pillow, but it was clean and friendly. I was afraid that a five-star, glitzy hajj would detract from the spiritual aesthetics of Mecca and diminish my experience as a pilgrim. In the coming days, I came to see our hotel as a palace (really, it was called the White Palace Hotel) relative to the living situation of most of the pilgrims we saw, who found nightly shelter on the bare cold rocks of the hajj trail.

Walking to the Masjid al-Haram, I felt like a nervous bride, anxious to see her groom for the first time on their wedding day. It was exhilarating to be conscious of entering an immediate portal to the Divine. I asked my Mama to hold my hands and walk me to the Ka'abah with my eyes closed so that, when I opened them, I would see it there, fully and in all its majesty, before me.

When Mama said, "We're here, open your eyes," my lips mumbled a little prayer and my eyes sprung open. It was as if my entire life was leading up to that moment. I felt like I had known this place since birth, like it had been waiting for me, perhaps because I turned my face to it five times, every day. As if pulled by a magnetic field, I began to float in circles around it and praised my Creator and Sustainer for inviting me here. My heart fluttered, and I felt wiped clean with the wings of angels. I had never felt such joy in my life! I prayed for the eternal joy of this ummah, my extended Muslim family. And I thought about how elegant and sophisticated my creed was for enjoining such a gentle physical ritual in complete unity alongside the river of blessed water in this otherwise scorching desert!

After tawaf, I prayed behind the Maqam of Abraham (peace be upon him) and went to collect zamzam water for my mother and myself. I went to the nearest water station without realizing that there were designated stations for women to get zamzam. A brother snapped at me when I tried to stand in line behind the men: "Men only, lady!" I replied defiantly, "It's all the same, brother." He laughed and said, "No, it's not!"

By then I was surrounded by a crowd of men and felt embarrassed by the man's remarks. This being the Haram, chivalry found its way and another man kindly offered to pour me a cup-full while I retreated to the back. I thought about the otherwise open atmosphere that allowed for the mixing of the sexes here and compared them to those of mosques in most Muslim-majority communities; there a woman would not be welcomed into the main space of the mosque as she is in the House of God. Despite the men-only water stations and many a pushy religious police's attempts to keep women in the back during prayers, the imprints of Wahhabi patriarchy could not penetrate these walls, thankfully.