Not Just About Christmas 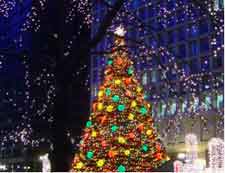 This week we wish you a merry Christmas! But first, we recognize a seasonal milestone marked by many ancient traditions: the Winter Solstice. Saturday, some African Americans observe Kwanzaa, Christians honor St. Stephen, and Zoroastrians mark the death anniversary of their prophet, Zarathustra. Also this week: Muslims observe the Day of Ashura in various ways, Jews hold a minor fast, and Catholic Christians celebrate the Holy Family. Read all about these holidays and observances below.

The word "solstice" is derived from the Latin words "sol" and "sistere," meaning "sun" and "to stand still." Many cultures hold festivals of rebirth, most often involving the sun or sun gods. According to cyclical calendars, the year is "reborn." In Greek mythology, the gods and goddesses met on the Winter Solstice; in ancient Roman tradition, a festival honoring Baccus occurred for one month; according to Wiccan belief, Winter Solstice is one of the eight solar holidays and celebrated as the rebirth of the Great God; and in the Scandinavian Norse and Germanic tribes, Midwinter called for a Yule party.

Today, many Wiccans still hold to the rites associated with Winter Solstice (the Druidic tradition is where the Midwinter colors of red, green, and white originated). Circle Sanctuary, a nonprofit organization dedicated to education and community celebration, offers more information.

One of the world's most noteworthy structures -- Newgrange, a megalithic site in Ireland that predates the Egyptian Pyramids and even Stonehenge -- has a very special tie with Winter Solstice. This circular structure is, according to carbon dating, approximately 5,000 years old. (Knowth.com has extensive information on Newgrange.) This Passage Tomb that took a work force of 300 at least 20 years to build receives a strong shaft of sunlight in its central chamber at dawn on the Winter Solstice. This event lasts for 17 minutes on the dawn of the Winter Solstice, and for a few minutes on some of the mornings surrounding Winter Solstice. (Fodors has some neat tourist tips.) Archaeologists didn't make this startling discovery about Newgrange until 1969, although modern historians still aren't sure of all the reasons why this ancient structure was built.

Have a merry Christmas!  For fun recipes, activities, and letters to Santa, checkout Northpole.com -- or, if you're looking for carols, games, or charities, visit AllThingsChristmas.com!

While millions of Americans will be gathering around a decorated evergreen tree, opening gifts from "Santa" and feasting, Christians will also be commemorating the birth of Jesus of Nazareth. It's accepted that December 25 was not Jesus' real birthday. The Christmas date may have been chosen either because of an ancient Roman festival or its proximity to the winter solstice. (The History Channel gives a great overview of the history of Christmas.) Nevertheless, the evening of December 24 and December 25 have long been known as Christmas holidays. (See the Patheos article on the history and traditions of Christmas.)

This year at the Vatican, Pope Benedict XVI will break tradition by celebrating the Christmas Eve Mass at St. Peter's Basilica at 10 p.m., instead of midnight (a copy of the official press release was reprinted here). Vatican aides assure that the 82-year-old's health is fine, and that the time was moved to allow the pope to get more rest during the busy Christmas season.