The Reformation in a Nutshell 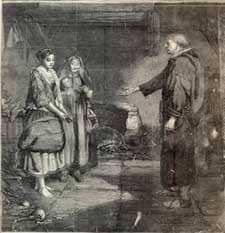 There used to be a time when your loyalty to the Protestant cause was judged by how much you despised Catholics. Today, with the ecumenical dialogue, the Manhattan statements, the ECT council, and the postmodern virtue of tolerance, people are more willing to let water under the bridge. "Maybe we overreacted," is the thought of many.

To the Catholics, Protestants are no longer anathema (which is bad), but are "separated brethren" (which is less bad).

Times have changed.  Have the issues changed?

Four hundred years ago we had a "situation" in the church that Protestants and most historians call the "Great Reformation." Catholics understand it as yet another rebellious schism. The first great division in the Christian church occurred in 1054 when the Eastern church (what are now known to us as the Eastern Orthodox churches) broke away from the Western church and its Roman pope. The Great Reformation was the second such division. For Protestants, this was not only a re-formation of the church, but a reclaiming of the Gospel which had been obscured and overshadowed by the institutionalized church of the day.

1. Authority: Where do we go in search of truth?

To the institutionalized church of the day (now known as the Roman Catholic Church), both Scripture and Tradition (notice the capital "T") represented a single "deposit of faith" handed down from the Apostles (i.e., written and unwritten tradition). Led by the pope and the congregation of bishops who were guided and protected by the Holy Spirit, the church could interpret both written and unwritten tradition infallibly. Think of a three-legged stool. All three "legs" (Scripture, Tradition, and the Church) comprise the "stool" of the church's ultimate authority.

To the Protestant reformers, while the institutionalized church possessed authority, it did not possess ultimate authority, and claiming that it did possess ultimate authority was itself an abuse of authority. While tradition (notice the lower case "t") was important and worthy of respect and study, it did not share equal authority with Scripture, but served Scripture. Everything, including unwritten tradition, the councils, and even the pope himself, had to be tested by and subject to Scripture. Protestants repositioned both the church and tradition underneath the Scripture.

This is the reason that the battle cry of the Reformers was sola Scriptura. The Scriptures alone, they believed, are our final and only infallible source of truth from God.

2. Justification: How is a person made right with God?

Here the issue was not necessarily the naturebut the instrumental cause (from a human standpoint) of justification. The institutionalized church believed that justification was a process brought about in the individual's cooperation with God through their faith and works. People were not justified, but were being justified, and they could never really know with certainty their eternal destiny before God. For most, the best they could hope for was, after death, to spend a certain (and usually quite extended) amount of time in a place called "Purgatory," having their "venial" (less grave) sins purged through a painful process of cleansing. Then, released from Purgatory, they would proceed into heaven. As modern Roman Catholics would put it, "Purgatory is the time to wash before dinner."