The Good Wife: Who You Callin' Extra?

Matthue Roth worked on the set of the new CBS drama The Good Wife as an extra, and first blogged about it here. The episode, "Unorthodox," is about the Hasidic Jewish community in Chicago. It aired on Tuesday, November 10th. 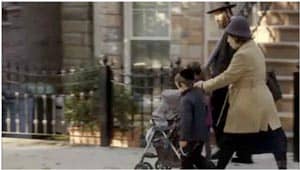 If you didn't know, the main use of extras in film and TV is as background. Our job is to make reality look normal, or at least palatable, and fill it with much the same grouping of people who would otherwise exist on the very same street or park or police station -- only we are specifically hired to completely ignore it all, instead of gaping at the movie stars or straining to overhear the story.

So it's not surprising that, when they were originally casting this, they didn't think to call real Hasidim. You don't have to have an intimacy with God or an extensive knowledge of esoteric kabbalistic teachings to be able to walk down the street in a fur hat. As a matter of fact, it's probably better if you don't. A bunch of us were hassled by wardrobe people for having our tzitzit on the side, covered by our coat, instead of sticking out in front like a weird sort of phallic symbol. Authenticity gives people a reason to worry. They want to make things look right, not be right, and rightly so -- they're in the business of visuals. Instead, we give them roadblocks.

And more than a few additional problems.

We were supposed to have a sukkah. It is the middle of the Feast of Tabernacles, and observant Jews don't eat anything outside of a small palm frond-covered booth. Okay, anything is an overstatement. In severe cases, there's dispensation for eating snack food in small amounts. And it has to be certain kinds: only foods that satisfy the most general blessing, which means they basically have to be either completely ground up or chemically based. (Potato chips, for instance, are a question, because they still sort of look like potatoes.*) But that doesn't change the fact that the catering crew is putting out the lunch buffet, and it smells really good. Even when the menus are posted, and they're serving -- wait for it -- barbecue pork loins. It's not offensive. It's just funny.

Rabbi Elli grabs me by the kapote and whisks me out of there. We head to a local bodega, where we secure the healthiest choices we can muster with our restrictions: tortilla chips and hummus. When we return, everyone's looking at us. When we sit at our own table, with the other Hasidim-for-a-day, and start digging into our Garden of Eatin' Sesame Blues, it does nothing to diminish our conspicuousness. We might all be playing Hasidic Jews, but one thing never changes: the more Jewish you are, the more you stick out.

By the end of the day, playing a Hasid has run its course. I'm a little edgy, since people told me the shoot would take half a day, we've been here since 6:00 a.m., and it's already 4:30 p.m. I told work I'd be in a few hours late. The other actors laugh at me. "‘Half a day' means till 5:00!" they exclaim. "A full day will take you till midnight or 1:00 a.m." Then everyone takes turns telling their nightmare stories -- Elli was once filming in a concrete tube off the river in the middle of winter until 4:00 a.m. -- and trade fables of Golden Time. Union pay scale provides for time-and-a-half for hours 9-10 in a day; then double-time up to hour 16. After that is something they call "Golden Time" -- for every hour worked past the 16th hour of a day, actors earn an entire day's pay. Possibly the only thing more legendary than getting paid Golden Time is the tradition of telling set stories itself.

For the final scene, the producers bundle all the extras out into the sidewalk. A truck pulls away from the curb; Ms. Margulies and Ms. Panjabi stand in the center of the street, watching meaningfully as it zooms off. I'm again paired with my wife (sans kids, this time), and we take upon ourselves the now-familiar goal of walking down the street and pretending to talk to each other. Now, though, we actually talk. Either I'm getting to be a passable actor, or we have enough shared experience that we can.

She tells me how she started out as a stage actor, got into this area. How she's good at this, how it's kind of become her regular schedule, how being stereotyped is an advantage. (Her agent says she looks "ethnic," which means that she's often called upon to play Jews, Greeks, and Arabs. Recently, she purchased her own burqa and learned to tie it, which means that, like my beard and sidecurls, she's paid $18 extra a day for "authentic attire.")