What Would Jesus Buy? 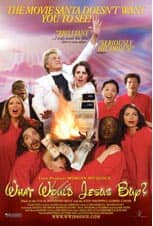 The Season of Advent is here.  So are Black Friday and Cyber Monday.  ‘Tis the season to shop!  Or is it?  What if we slowed down our shopping, as Reverend Billy challenges us to do?  What if we spent some time in conversation with family and friends, asking the question, what would Jesus buy?

Once upon a time, America was a mighty producer, but now we are a nation of consumers.  Consumer shopping is the fuel that keeps our economy going, and in this season of "jobless recovery" the pressure is on us to get out and spend.  But where does the money come from?  We carry long-term debt on our credit cards.  Is this what Jesus asks of us?

As a nation, we spend up to five times more time shopping per week than we do in religious services.  We spend more time per day in our own homes on the Internet or in front of the television, absorbing marketing messages, than we do talking to each other.

Reverend Billy of the Church of Stop Shopping (http://www.revbilly.com/) wants us to think about this.  In 2007, 28 days before Christmas, Reverend Billy and the Church of Stop Shopping Gospel Choir loaded into two bio-diesel buses and drove across the country on a missionary crusade, followed by a documentary camera crew.  The result was the feature film What Would Jesus Buy?

This hilarious and eye-opening movie from the studios of Morgan Spurlock is not a mockumentary.  Questioned for his generous use of shtick, many want to dismiss Reverend Billy, but he is dead serious about his message.  An accomplished performer, he is not simply a comedian or a performance artist.  He isn't into irony.  Instead, Reverend Billy and the Church of Stop Shopping Gospel Choir are specialists in guerrilla theater, and they are profoundly committed to political action.

Taller than the average American, sporting a bleached, collar-length pompadour and a white silk suit, surrounded by 35 gospel singers in crimson robes and accompanied by a seven-piece band, Rev. Billy is impossible to miss.  Like a long line of evangelists before him, he has a flair for the dramatic, and isn't above using shock tactics to grab people's attention and rattle them in their complacency.  From holding a large plush Mickey Mouse over his head and declaring him the Antichrist, to performing a mass exorcism on credit cards, Rev. Billy is genuine about his ministry.  As his sister says, the message is the reason for his performance.  And the message, of course, is very simple: Stop Shopping!

What does Christmas mean to you?  Have you learned to equate intimacy and togetherness with the giving of gifts?  How many hours do you spend in stores or browsing catalogues to find just the right thing?  Do you find yourself buying pointless items, just to be able to give something?  Do you feel pressure to buy expensive gifts, as though a small token will send the wrong message?  Does the Christmas season bring the anti-blessings of dread and anxiety?  If any of this describes you, you are certainly not alone.  Reverend Billy understands, shouting, "We think we are consumers at Christmastime, but no!  We are being consumed at Christmastime!"

Reverend Billy suggests that we ask ourselves, what would Jesus buy?  It's unlikely that he would buy a Playstation, a Wii, or an iPhone.  Jesus was a wandering preacher, and probably wouldn't even have an address, much less a credit score.

In fact, watching this movie, I was struck by the unintentional recreation of the lives of Jesus and his followers.  Reverend Billy and his choir visit malls and box stores across America, begging people to just stop shopping, and in every case, police and security are summoned, and the preacher and his choir are hustled away.  Reverend Billy puts everything on the line in his pursuit to save people from debt, anxiety, and dread.  His own wife hasn't been able to keep track of the number of times he's been to jail.