Why Christmas Matters to Me

From the Christ and Culture blog: 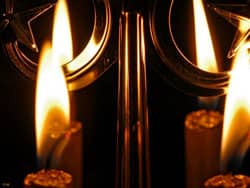 I attempt every year to pause amid the travel and the busy-ness and the materialistic frenzy of the Christmas season in order to consider, in a sustained and prayerful manner, what exactly it is that Christian families and churches throughout the centuries have sought to celebrate in the Christmas holiday.  It is an important spiritual discipline, I find, and this year I decided to share my thoughts.

I would love to read similar lists from others.  But the following four points summarize what Christmas means to me:

1.  In the Christmas story we read the opening lines of God's love letter to the world.

We often speak of the work of Christ as though God were compelled, by some celestial mechanics of salvation, to do precisely this in order to save us.  A blood sacrifice was required -- we say -- and the only remaining solution was for Christ to become the perfect sacrifice on our behalf.  Humankind had to be ransomed -- we say -- from sin, death and the devil, and therefore Christ became the ransom.

Yet God was not compelled to do any of this.  God Himself is the author and arbiter of all of the rules.  There is no higher authority above God that forces him to follow regulations or fulfill requirements.  God might have annihilated humankind and started over; God might have changed the rules so that no sacrifice and no ransom were necessary.  It is not that God could not have done these things; it is that He would not, because God is changeless and just, righteous and true.  All that compels God is His own character, which is not compulsion but self-expression.

Perhaps this is a better way to think of all of God's work, from creation to incarnation to redemption: as an extended act of divine self-expression.

And what is expressed?  What is the character of God made manifest in this story?

Love.  Like the creation and restoration of all things, the birth, life and death of Jesus Christ are expressions of a most extraordinary divine love.  A love that never fails.  A love that seeks the lost sheep beyond every river and mountain until the lost sheep is found.  A love that will suffer and sacrifice all things on behalf of the beloved, that lays down its life for its friend.  The same love that brought us into being in the first place enters, in the village of Bethlehem in the person of Jesus Christ, into a new and more intimate relationship with us.  God so loved the world that He sent his only begotten son, so that every person who puts his faith in him will be reconciled to God and brought to live with Him forever.

2.  We celebrate in Christmas that God became a person in order to enter into a personal relationship with us.

There once was a time when I was embarrassed to speak of a "personal relationship with Jesus."  Surrounded by professors of theology and scholars of religion who looked down on popular expressions of religious devotion, I spoke not of Jesus but of "Christ" or the "Son of God" or (better) the "Second Person of the Trinity."

Yet I came to realize that when evangelicals and others speak of a personal relationship with Jesus they are expressing, albeit in different language, the inward relationship that mystical theologians have described throughout the generations of the church.  To "walk and talk with Jesus" is to seek the constant indwelling of Christ, a mystical union that is not abstracted from but united with everyday life and all its activities.

That inward union, that personal relationship, is only possible because God became a person.  Our most intimate relationship with God, in other words, is only possible because of the astonishing and impossible event we celebrate at Christmas.  God entered into our condition.  God became one of us, capable of relating to us not merely as Creator and Mighty God but also as friend, as brother, as beloved.  The truck driver who imagines Jesus in the passenger seat as he rolls across the plains of Nebraska, the school teacher who asks Jesus for patience as she nears the end of the school day, the worker in the fields of Alabama who talks and jokes and argues with Jesus as he goes about his work, the crippled child who asks Jesus for the strength and courage to carry on-all of these, whatever their education or theological sophistication, give expression to a profound theological truth that is all too often forgotten amongst the Christian literati: that ours is not only a high and mighty God who fashions the suns and measures the span of the heavens, but a God who dwells amongst the lowly, the humble, the contrite and the suffering.