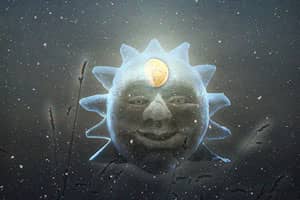 Winter Solstice occurs on December 21 or 22 in the Northern hemisphere. It refers to "the shortest day of the year," when the least amount of sunlight reaches the earth. The term "solstice" derives from the Latin words sol (sun) and sistere (to stand), meaning that the sun has reached its northernmost ecliptic and appears to stand still.

Throughout history, many cultures and religions have marked this day with festivals and rituals. This is in celebration of the fact they have survived halfway through the winter (this holiday is sometimes called "Midwinter celebrations"). This was especially significant in northern European countries, where it was not always certain that food storage would last through winter months.

To many societies, Winter Solstice also symbolized the earth's regeneration or rebirth. From this day forward, the days would continually grow longer as sunlight increased. Worship of a sun god or goddess is frequently associated with this celebration, as for example the goddess Beiwe in Scandinavia. Beiwe is associated with health and fertility, and was believed to have traveled through the sky, helping plants to regain their green color.

In ancient Ireland, Celts celebrated Meán Geimhridh during the Winter Solstice. Each day between December 19and 23, rays from the sunrise would shine through a sacred hallway and room built at just the right angles to capture the light.

In Slavic areas known today as Russia, Bulgaria, and Ukraine, earlier societies believed that evil spirits were most powerful on the shortest day of the year. Darkness and the Black God defeated the sun on the Winter Solstice, after which a New Sun was born. The Old Sun, named Hors, was commemorated with a ritual dance.

Even today, many Chinese and other East Asians celebrate the Winter Solstice. It is called the Donghi festival and is a time for rejoicing at the longer light hours to come, symbolizing an increase in positive energy.

Still other cultures hold winter celebrations near, but not on, the day of Winter Solstice. These, too, often involve light, fires, greenery, and merry festivities. For example, Christmas was originally scheduled to fall on the Winter Solstice. Until 1582, when the Gregorian calendar replaced the Julian calendar, the solstice took place on December 25.

Scandinavians commemorate Saint Lucy on December 13, which is equivalent to the Winter Solstice in the Julian calendar. This saint's name refers to light (the name Lucy is derived from the Latin word for light, lux). In popular celebrations today, young girls dress up as Saint Lucy in honor of the holiday.

Throughout history and in many regions of the world, peoples have marked the Winter Solstice as a yearly cycle of life. It is a turning point, a time for reflection on the past and for hope in the future.

Winter Solstice, occurring in Midwinter or on the shortest day of the year, has been associated with many cultures and traditions. Festivities surrounding this holiday are mainly meant to generate light and merriment in the midst of deep winter. Popular activities include burning bonfires, sacrificing animals to a sun god, singing, dancing, and feasting.

Among ancient Germanic peoples, Winter Solstice was known as Yule. Celebrations included burning a Yule log, singing Yule songs, and sacrificing and eating a Yule pig (this tradition has given rise to the popular Christmas ham), as well as a Yule goat.

Wassail, a hot and spicy beer, may also have originally been associated with the midwinter festival. Even today, many northern Europeans enjoy the drink during this time of the year.

In the United States, informal Winter Solstice gatherings often include a feast. Although there is no prescribed menu for these meals, the focus is often on fall harvest foods: berries and nuts, squash, potatoes, and hunted game.

The feast of Saint Lucy occurs on December 13, the Winter Solstice according to the Julian calendar. This festival is perhaps most popular in Sweden. According to tradition, on this day the eldest daughter in a family puts on a white dress, a red sash, and a wreath adorned with candles. Wearing this costume, she carries a tray of coffee, lussekatter (Swedish for "Lucy cat," referring to a sweet bread roll) and pepparkakor (Swedish for "pepper cookies") to her parents.