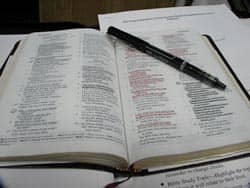 The authority of the Bible is a perennial and urgent issue for those of us who stake our lives on its testimony. This issue, however, is bound to remain unsettled and therefore perpetually disputatious. It cannot be otherwise, since the biblical text is endlessly "strange and new." It always and inescapably outdistances our categories of understanding and explanation, of interpretation and control. Because the Bible is "the live word of the living God," it will not compliantly submit to the accounts we prefer to give of it. There is something intrinsically unfamiliar about the book; and when we seek to override that unfamiliarity, we are on the hazardous ground of idolatry. Rather than proclaiming loud, dogmatic slogans about the Bible, we might do better to consider the odd and intimate ways in which we have each been led to where we are in our relationship with the scriptures.

At my confirmation, the pastor (in my case, my father) selected a verse for each confirmand, a verse to mark one's life. It was read while hands were laid on one's head in confirmation, read at one's funeral, and many times in between. My father read over me Psalm 119:105: "Your word is a lamp to my feet! and a light to my path." Providentially, he marked my life by this book that would be lamp and light, to illumine a way to obedience and mark a path to fullness, joy, and wellbeing.

Before that moment of confirmation, through baptismal vows and through my nurture in the faith, my church prepared me to attend to the Bible in a certain way. I am a child of the Prussian Union, a church body created in 1817 on the 300th anniversary of the year Luther posted his theses on the door of the church. The Prussian king, weary of the arguments about the Eucharist going on between Calvinists and Lutherans, decreed an ecumenical church that was to be open to diversity and based on a broad consensus of evangelical faith that intended to protect liberty of conscience. This church body brought to the U.S. a slogan now taken over and claimed by many others: "In essentials unity; in nonessentials liberty; in all things charity."

"In all things charity" became the interpretive principle that produced a fundamentally irenic church. The ambiance of that climate for Bible reading may be indicated in two ways. First, the quarrels over the historical-critical reading of the Bible, faced by every church sooner or later, were firmly settled in my church in 1870, when one seminary teacher was forced out of teaching but quickly restored to a pastoral position of esteem. Second, our only seminary, Eden Seminary, had no systematic theologian on its faculty until 1946, and things were managed in a mood of trustful piety that produced not hard-nosed certitude, but irenic charity.

My first and best teacher was my father, who taught me the artistry as well as the authority of scripture. After my confirmation came a series of others who further shaped me in faith. In seminary I had an astonishing gift of excellent Bible teachers, none of whom published, as perhaps the best teachers do not. Allen Wehrli, who had studied under Hermann Gunkel in Halle, taught us the vast density of the Bible's artistry, with attention to the form of the text. His pedagogy was imaginative storytelling -- long before the work of C. Ernest Wright or Fred Craddock, Wehrli understood that the Bible is narrative.

Lionel Whiston introduced us to Gerhard von Rad, who was just then becoming known to English readers. I have ever since devoured Von Rad, who showed us that the practice of biblical faith is first of all recital. I learned from Wehrli and Whiston that the Bible is essentially an open, imaginative narrative of God's staggering care for the world, a narrative that feeds and nurtures us into an obedience that builds community precisely through respect for the liberty of individual Christians.

After seminary, purely by accident, I stumbled onto James Muilenburg at Union Seminary in New York, arguably the most compelling Old Testament teacher of his generation. He taught us that the Bible will have its authoritative, noncoercive way with us if we but attend with educated alertness to the cadences and sounds of the text in all its detail.

Since graduate school, Ihave been blessed by a host of insistent teachers -- seminarians who would not settle for easy answers, church people who asked new and probing questions, even other Bible teachers. But mostly my continuing education has come through the writing and witness of people who are empowered by the text to live lives of courage, suffering, and sacrifice, people who have found this book a source and energy for the fullness of true life lived unafraid. This succession of teachers has let me see how broad, deep, demanding, and generous is this text, how utterly beyond me in its richness. "A lamp to my feet and a light to my path..."