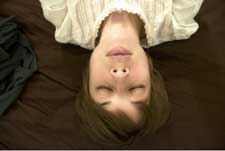 Does your image of God impact your relationship with your body?

Most people, including atheists, have an image (or images) of "God." We inherit these images from our religious traditions, our families, and/or our culture. Often times, these images are largely unexamined, whether because we have been instructed not to question them, or because we've never had the opportunity to explore their implications more deeply, or because they simply don't seem relevant to our lives. Whatever the case, this lack of examination may be unfortunate because regardless of our spiritual orientation (or lack thereof), images of "God" can have a profound effect on how we see and experience our bodies.

This is because such images provide a blueprint for how we think about power, how we envision gender relations, and how we see the connection (or not) between spirituality and physicality. More specifically, traditional images of "God" as an almighty being or controlling male power who hovers over the rest of creation (an image that most atheists and agnostics rightly reject) tacitly contribute to women's belief that they can and should control their bodies, and that this is in fact the way to virtue.

Let's start with the image of "God" as controlling. As Wiccan priestess Starhawk points out, this image reflects an understanding of power as "power-over" (her term -- see the first 14 pages of Magic, Sex, and Politics). In this paradigm, power = domination; it is exercised by one superior entity controlling or forcing an inferior other. To the extent that we believe (or not) that "God" operates in the world in a controlling, almighty manner, we may unconsciously seek to exercise power --whether toward our bodies, or toward others, or both -- in ways that are domineering.

"Power-over" is the kind of power many women turn to in their attempts to "correct" their bodies by losing weight. Often the unspoken logic of these efforts goes something like: "Controlling what I eat makes me feel more in control in my life." But this conquest-oriented approach to power often leaves us feeling fragmented and unhappy, not only because, ultimately, we do not control our bodies (witness the way they change, get sick, and even die without our consent), but also because it puts us at war with a fundamental part of ourselves: our physicality.

What's more, envisioning the divine as a "power over" us can prevent us from seeing another kind of power -- a power that Starhawk refers to as "power-from-within." This alternative form of power more closely resembles the Latin root word of power -- "podere" -- which means "to be capable." In this model, power is the process of growth and empowerment inherent in the process of life itself. If we recognize "God's power" as experienced in and connected to our own empowerment and evolution, we may find the strength we need to face our problems more squarely, and we may come to experience our own bodies as imbued with the sacred power of life.

Now let's consider how the typical view of "God" as male shapes our psychology and our society. One of the mothers of feminist theology, Mary Daly, summed this up well when she noted (I'm paraphrasing here) that if "God" in "his" heaven is a father-king ruling "his" people, then it is natural for society to envision authority and power as residing primarily in men, and it is natural for women to internalize a sense of their own spiritual inferiority (see Daly's Beyond God the Father). Sacred images reinforce social patterns, norms, and expectations, which are simultaneously internalized in the minds and hearts of individuals. Therefore a male image of "God" implicitly affirms male authority in society and in individual psyches. A woman may not be conscious of her assumption that "men are more powerful" or that men are "more natural-born leaders" in order for it to impact her self-understanding, including her experience of her body. If more women trusted their own spiritual authority and innate power to make a difference in the world, perhaps they wouldn't be as vulnerable to the belief that their primary value resides in their physical appearance.

Another conventional assumption about "God" that quietly supports women's troubled relationships to their bodies is the idea that "God" is a totally transcendent, separate being who resides above the physical realm of existence. This theological convention locates the divine beyond the sphere of human beings and the earth. "He" is a supreme and omnipotent being who is categorically other. This image of "God" mirrors the Cartesian vision of the "mind" as separate from and ruling over the "body," and in a similar manner, it suggests that our bodies are less than spiritual (to put it nicely), or profane (to be more blunt about it). This sense that our bodies are somehow less-than-holy fuels the belief that we need to constantly monitor and "fix" them. It also robs us of the opportunity to experience the life force of our bodies -- the power of life that is both beyond and within us and that animates and sustains us -- as sacred. How might we view and experience our bodies differently if we understood them as imbued with the divine life?