Polishing a long double-edged knife to be used in a ritual that evening, Magic nods and adds that pagans don't sacrifice humans or animals either. "One of the basic Wiccan tenets is, ‘Do whatever you want, but don't harm anyone else,'" Magic says, wagging his knife for emphasis.

Standing outside a cathedral-like church in Memphis, Tennessee, a teenager (who asks to be called Moonlight) sporting a pink blouse, a matching pink iPod, and a small silver pentacle necklace, says she owns every Harry Potter book and that it cultivated her interest in Wicca. "But witches don't fly on broomsticks or say a couple of magic words and -- poof -- change stuff. That's just Hollywood," Moonlight says.

Real magic focuses will or desire to achieve a result, she explains. "Like, if I want to hit a home run in a softball game, I'd visualize myself hitting that home run over and over again. Visualization is actually the starting point for magic."

Moonlight, who conceals practicing witchcraft from her devout Christian family, says casting a spell adds more elements -- including candles, incense, drums, and chants -- to enhance the energy level. "But be careful what you wish for," she says. "Once I did a love spell and got the guy I wanted, but when he wouldn't leave me alone I had to call the cops."

As a young witch, Moonlight is still learning. "I'll never do a love spell again because it interferes with free will, which is not allowed in Wicca and is dangerous."  And Moonlight isn't the only Southern witch learning lessons. T.K., a 22-year-old woman in Savannah, says that in high school she once turned to a group of classmates and blinked, turning her eyes from blue to green. As she continued to blink and baffle, her teacher ordered her to the principal's office for practicing witchcraft. Afterward, T.K. says, she got a splitting headache, the divine's way of punishing her for showing off with magic. T.K. hasn't showboated since and is now headache-free.

Content with her eye color, Gina Molter, a Wiccan who holds a master's degree in library sciences, squirmed in her church pew. Listening to the evangelical pastor declare that Wiccans are going to hell, she wanted to leave.  But Molter, 32, the daughter of a Methodist minister, says she occasionally attends the conservative megachurch in Beaufort, South Carolina for the music, the feeling of community, and the celebratory nature of worship. "I find God everywhere," she says. "Even in church."

Relaxing with a group of pagan friends in the living room of a Correllian Wiccan priest, deep in a wooded patch of Lady's Island, South Carolina, Molter seems especially at ease. The Church of the Circle in the Oaks meets every Tuesday night. Describing itself as a Wiccan community, it boasts a small pagan oasis in a state that ties Alabama and Louisiana as the nation's most church-attending.

Despite the June humidity smothering the faint relief offered by a laboring floor fan wedged in an open window, Molter remains animated. She says Christianity is removed from nature and teaches that God created the earth to be subdued by humans and consequently exploited. "But the nature-based religions," she insists, "believe that nature is not to be conquered, but celebrated, and a source to connect with the divine."

But Bruce Richards, the 62-year-old salt-and-pepper-bearded leader of the group, says that witches and Wiccans aren't picking a fight with Christians. "If someone has a relationship with Christ and that makes them happy and fulfilled, that's great. They got it," he insists. "We're not trying to convert anyone to our path."

However, Richards says power pulsates in his path. His grandmother, a witch, once told him that when Germany tried to invade England by sea in 1940, a group of up to a thousand witches gathered to do a spell to prevent the invasion. After the ceremony, a terrible storm raged and the naval invasion was aborted, she said.

"A witch that can't kill, can't cure," Richards says. A question about whether he has ever done such a spell went unanswered and wasn't pursued.

Christians Peeking into the Broom Closet

In a trendy Italian café in coastal Georgia, the warmly smiling Rachel Cotton-Smith describes herself as an eclectic pagan, who pulls in ideas from Taoism, Christianity, and various other faiths.

Cotton, 31, who was raised a Christian, always felt closest to God in nature. She says she finds church-attending Christians increasingly curious about Wicca. "They don't want to know about dogma," she says, "they want to know how they can connect with God." And one way Cotton teaches them is through meditation. "Prayer, for me, is talking to God, and meditation is listening," she says. 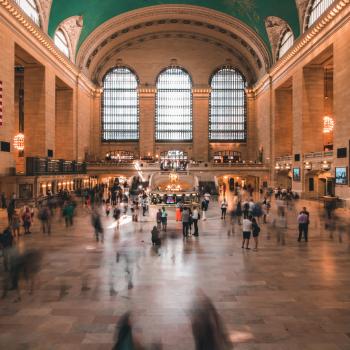 The Anger of The American People
Willis Joey
Get Patheos Newsletters
Get the latest from Patheos by signing up for our newsletters. Try our 3 most popular, or select from our huge collection of unique and thought-provoking newsletters.
From time to time you will also receive Special Offers from our partners that help us make this content free for you. You can opt out of these offers at any time.
see our full list of newsletters
Editor's picks See all columnists