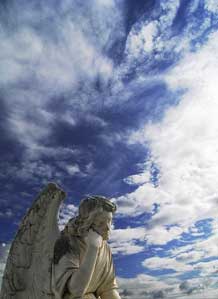 Many of the drug addicts we served when I was director of the Urban Ministry homeless service center were infected with HIV. One of them, Buck, experienced a spiritual resurrection during the last year of his physical life. We discovered he had AIDS when he came to the drop-in center one morning and couldn't talk. I had assumed he had lost so much weight because of his addiction to crack cocaine. But when Jeanne, our caseworker, rushed him to the hospital, she overheard a nurse mention that Buck was HIV-positive. Later we learned that he had temporarily lost his speech because of an AIDS-related lesion in his brain.

Jeanne helped him find housing and other social services when he was released from the hospital, and spent many hours with him offering spiritual and emotional support. His little skid-row room became a haven of acceptance and loving hospitality in the chaotic single-room occupancy hotel where he lived. The other residents loved to go to his room because it was peaceful there.

Buck had been a big, fat, bearded biker and dope dealer. Now he was a skinny guy with a beatific smile. In the dying process his ego passed away, leaving only the love that is Christ to shine through. In the months before his death, he was reunited with many members of his family, reconciling with them years after his own bad choices had estranged them from him.

One after another AIDS-related disorder weakened him. An hour or two before he died, Jeanne, sitting at his bedside, recorded his last words uttered in a semiconscious state:

Where did Buck go? What happens after we die?

The Old Testament presents no clear belief system about salvation or damnation in an afterlife. It appears that the early Jews did not believe in the traditional Christian heaven and hell. Life happened while they were alive, and when they died, that was the end. Anything like salvation was something people experienced during their natural lives.

But the Jewish patriarchs took burial very seriously (Genesis 23 and 48). The ancients (and indigenous cultures all over the world today) did not make the same distinctions between the animate and the inanimate that we do. If you assume everything is in some way alive, including rocks and water and air, it is not much of a leap to believe that there is power in the dry bones of your ancestors. Reclaiming for ourselves this ancient awareness of the life-force in all things could go far in relieving our modern anxieties about death.

By New Testament times, the Jewish people were influenced by the ideas of the Greek culture, with its myths about the afterlife. Jesus himself expressed inconsistent descriptions of what happens at physical death. In one passage, he talked about what is translated in English as "hell" (Matthew 18:9), but the original Greek word was Gehenna, a valley just outside Jerusalem that served as a constantly burning garbage dump. At other points, he talked about heaven and hell in a more Greek fashion, suggesting there was a place of eternal reward for the saved, and another place of eternal punishment for the wicked and the unbelievers (Luke 16:19-31).

The traditional Christian descriptions of heaven and hell are not clearly delineated in the Bible. They are a composite of ancient Greek and Near Eastern folk traditions, various biblical stories from the Old and New Testaments, and images that continued to be developed into the Middle Ages. Over the millennia in the Christian tradition, the concept of salvation evolved from a spiritual state of reconciliation with God while one is alive into an inclusion of physical rescue from the sufferings of the earth and the torments of the underworld.

If, indeed, Jesus meant that those who didn't believe in him would be damned to roast in hellfire for eternity, then I would have to reject this part of his teaching. But the Jesus of my faith demonstrated that salvation was the spiritual state of being at one with God -- something he and his followers experienced in their natural lifetimes. "The kingdom of heaven is among (or within) you," he taught (Luke 17:21). For him, damnation was the spiritual state of separation from God, something he and his followers also experienced in their earthly lives. After all, in his agony on the cross, Jesus said, "My God, my God, why have you forsaken me?" (Matthew 27:46) That was hell -- a familiar experience for anyone who has endured terrible suffering or loss.