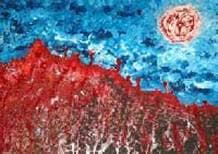 Mormons don't talk much of hell. Maybe this is a good thing, overall. I don't know. I did a quick search of General Conference talks at lds.org, and there just isn't much there. In fact, one of the search results was actually referencing the word "he'll."

We Mormons are very pleased with our three-degrees-of-glory cosmology and tend to disdain the heaven/hell dichotomy found in traditional Christianity. For us, this life is no pass/fail endeavor. You get actual grades. Star students go to the Celestial Kingdom, average students to the Terrestrial, and layabouts to the Telestial. Those who do fail go to Outer Darkness, i.e., Hell, but you have to get up pretty early in the morning to fail your Second Estate, aka Mortality. You have to acquire the greater light and then sin against it; really, who has the time for that? So I imagine most people who grow up Mormon don't spend a lot of time worrying that they'll end up in Outer Darkness because to stay safe, you just have to not deny the Holy Ghost. It's easy; all you do is nothing.

On the other hand, when you consider that only those in the Celestial Kingdom get to have personal communion with God and enjoy the same sociality that they do in mortality and inherit worlds without end, etc., anything less than the highest tier of the highest kingdom seems like a kind of hell in comparison. There is, of course, that old Mormon legend about even the lowest kingdom being so wonderful that you'd kill yourself to get there, but I always thought that sounded too good to be true. Even if it were true, though, with the grass always being greener and suicidal folks unlikely to be stripped of envy, wouldn't the Telestial kingdom eventually look pretty shabby next to the others? You'd be kicking yourself for drinking that hemlock then.

So I'm a simple girl. I tend to think of just heaven and hell. I don't care what you call your version of the afterlife. I just want to be happy -- or, more specifically, I don't want to be unhappy, and to me, heaven=happy, hell=unhappy. Therefore, I don't want to go to hell. Everything good that I do in life, and especially all the bad stuff I don't do, it's all motivated by this strong desire to not go to hell. Hopefully I become a better person in the process, but that's secondary; Not-Hell is always the primary goal. That's why I'm a stick person.

I'm continually amazed by the number of Mormons who believe that a loving God couldn't suffer his children to be condemned to hell (or a hell-like existence) for eternity -- that no matter what you do or what kingdom you inherit after the Final Judgment, God must allow for you to eventually repent and continue to progress in your eternal journey. I suppose if you imagine God as a loving parent, it's hard to imagine a parent ever giving up on a wayward child. I know I would never give up on a wayward child. (Unless the child turned evil. I'm talking Hitler-evil. I have no idea what I'd do then. Hopefully I don't raise any Hitlers. That might land me in hell.)

But back to the subject (before I got distracted by the fate of my immortal soul). This idea that it is never too late -- even after this life is over and the Final Judgment's been judged and we're all moving into our respective rooms in our Father's many mansions -- I have a bit of a problem with it. I have no problem whatsoever with the idea that God is actually pretty lenient, or that he grades on a curve, as it were. I mean, I try to live my life on the assumption that God has set the bar pretty darn high, but if I turn out to be mistaken, no one will be more pleased than I.