It's just that when the scriptures say that the wicked will suffer everlasting torment, I don't see a lot of room for interpretation. If the Final Judgment isn't Final, why do we call it the Final Judgment? Is this one of those deals where we make up a new meaning for a word just for the pleasure of still using it? If it's just a temporary judgment, shouldn't we call it something that doesn't mean the opposite of "temporary"? The "Post-Mortal Judgment," perhaps? I'd be cool with that. I just want us all to be on the same dictionary page. Same dictionary, anyway.

But I admit I do have another problem. It's this idea that God is too nice to send people to hell forever. I am inordinately annoyed by Sunday School discussions that try to explain away the use of the word "fear" in the Bible, as in "fear of God" -- that to fear God doesn't mean what it says, that "fear" in this context really means more like "respect." Well, yes. Nothing commands respect quite like the power to condemn you to an eternity of hellfire. That's what I always say.

I'm sure someone can tell me that the original Hebrew and Greek terms are some wonderful words that mean something much nicer than "fear" -- something like "I love Daddy so much that I'd do anything to please him" -- but the fact is, I myself have no problem with the word "fear," nor with its traditional meaning. I do fear God. He's all-powerful: that's not a cat I want to mess with. As the proverb says, "Fear of God is the beginning of wisdom." I like that proverb. It makes sense to me.

I said that I am a stick person. My children are apparently stick people, too. You could promise them a one-way trip to Disneyland and all the ice cream in the world if they cleaned their rooms and refrained from punching each other in the guts, but it wouldn't do any good. I understand that enlightened parents don't punish; they provide "consequences." Well, in our house Consequence is applied with a big (metaphorical) Stick, and it is the font of all goodness. Carrots tend to be useless at best. They sure don't inspire "respect."

It is easier for me to understand grace in the context of hell and fear. How meaningful is grace when hell isn't real and fear is unwarranted? God will forgive whom he will forgive; far be it for me to tell him his business. But I have to believe there are some he won't forgive. If not so, this life seems rather pointless, a sort of sick joke. When I think of the evil in the world and of all the suffering in evil's wake, I want God to apply a Consequence. I want him to apply it with a Big Stick. I don't want the evil to suffer the way they made others to suffer; I want them to suffer the perfect knowledge of their own guilt. That's the only misery that could possibly surpass the misery they caused in life. Would it be enough if the misery only seemed like forever, without actually being forever? I think not. To me it seems that pain is largely about perspective. Nothing's quite so bad when you know it's going to end. But then, I'm a stick person. Who's probably going to hell, for all she knows.

Post-script: While I was writing this I kept thinking of Jonathan Edwards' sermon "Sinners in the Hands of an Angry God." I read it in high school, and my idealistic teenage self, nurtured by years of kinder, gentler Mormon cosmology, was just scandalized that people would go to church to be abused this way. This is what a lot of people have against Christianity (stepping outside the Mormon world and into the world at large): this idea that we're only good because we hope for a reward, or alternatively, that we fear a punishment. They argue specifically that a belief in hell (and any accompanying fear thereof) renders us a) not truly good and b) not truly free to choose. They don't consider that perhaps it isn't the motivation that really matters, that the motivation isn't an end in itself. Carrots and sticks aside, what matters is where it leads us. And personally, as I've gotten older and matured (ugh, that word) spiritually (ugh, that other word), I'm not hating the stick so much.

This article was first published at By Common Consent and is reprinted with permission.

Rebecca J is a writer, housewife, and mother of four. Her hobbies include tap dancing, subgenre metal concerts, and food. You can learn far more about her than you would ever wish to know at madhousewife.wordpress.com. 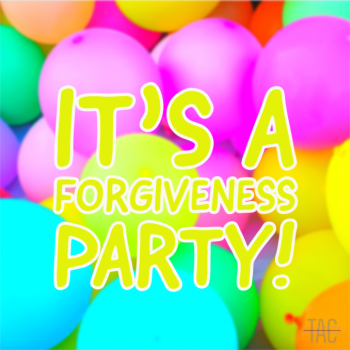 Welcome to The Forgiveness Party - May I Take Your Cloak of Shame?
JC LaChette
2 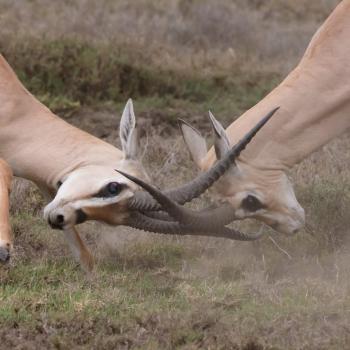 God and the Presence of Evil
Richard Simmons
4

What is the weekly reception of communion (the global term for which is...
Clint Schnekloth
About
Get Patheos Newsletters
Get the latest from Patheos by signing up for our newsletters. Try our 3 most popular, or select from our huge collection of unique and thought-provoking newsletters.
From time to time you will also receive Special Offers from our partners that help us make this content free for you. You can opt out of these offers at any time.
see our full list of newsletters