Is Jack Bauer Good for My Family? 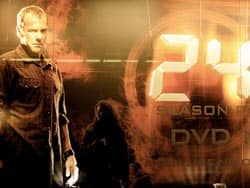 Yes, you read that correctly.  I did not write I'd let them watch; I wrote I want them to.  There are many reasons: excellent storytelling, unique plot devices, and the amazing feat that Jack Bauer never actually eats or uses the restroom during any "real-time" season.  More importantly, however, "24" has qualities that are good and true and right, attributes often overlooked by people looking for virtue on television.

Okay, so it's not "Touched by an Angel."

However, "24" shows us courage in a realistic sense.  By "realistic," I obviously don't mean courage enhanced by ridiculously advanced technology, super-compressed timelines, and the magical ability to travel across our largest and most traffic-choked cities in the blink of an eye.  I'm talking about courage in the true sense -- which is doing your duty in the face of real danger.  In most action-based television shows, the principal actors are generally safe.  They do astounding things, face extreme danger, and defy death so often that we just know they're going to be safe. But on "24," the only "safe" character is Jack Bauer, and even there we have this thought hovering in the back of our minds...  "They wouldn't kill off Jack would they? Would they?"  We worry because the producers have ruthlessly and relentlessly killed off almost everyone we've loved in prior seasons.  It's a miracle Chloe is still alive.

No one (again, aside from Jack) could face the kind of extreme dangers featured in the show for year after year and escape unscathed.  That's just not how the world (or guns or bombs or chemicals or germs) work.  And yet, "24" leaves little doubt that the sacrifice was worth it.  And that brings me to my second point.

"24" comes close to showing us evil in a realistic sense.  Some critics describe the show's villains as cartoonish or predictable.  And yes, they sometimes can be.  By now, we all know the script: the initial terrorists (often jihadists) are actually puppets for the "real" villain (often some Western industrialist).  Regardless of their background or wealth, the bad guys single-mindedly focus on death and destruction.

But surely that's too simple, right?  Don't bad guys in real life have complex motivations, and aren't they often created by our own sins?  Aren't they far more rational than portrayed on the show?

It's certainly true -- especially when dealing with nation-states -- that bad guys can be quite rational, do have complex motivations, and often carry a legacy of historical grievance that both magnifies and complicates the relevant disputes.  But it's also true that there exists in this world pure, nihilistic evil.  I've seen this ­-- people who love death -- with my own eyes in Iraq.  And after staring into the eyes of literally hundreds of terrorists while running detainee operations for 2d Squadron 3d Armored Cavalry Regiment in Diyala Province, I actually think "24" shows terrorists as softer and more human than they actually are.  Their handiwork broadcasts their true nature -- concealing bombs in children's school backpacks, raping women to shame them into becoming suicide bombers, and shooting babies in the face to "send a message" to their parents.  This is evil in its purest form.  And it makes you realize that common, cartoonish depictions of evil have lulled us into complacency -- providing a woeful parody that ensures we'll never really be able to process the images we've seen.

Even though it's just a TV show, "24" shows us that fighting evil involves making hard choices.  Our domestic debates about the means and methods of fighting terror happen on CSPAN or in comfortable air-conditioned television studios -- just so very removed from any sense of urgency.  It's one thing to talk about rules of engagement and information gathering, it's quite another to apply those rules when you capture a man who knows where the bombs are buried on a road you and your brothers-in-arms will be driving down in mere moments.

I'm not saying the torture in "24" represents the best moral choice.  But the show communicates the horrifying, wrenching choices placed on human beings in wartime -- when it seems the decisions will result in death either way.  These types of choices change you.

The bottom line is that I want to raise courageous kids who are willing to confront evil.  Plus, I want to raise thoughtful kids.  In a previous blog post, I asked a question: Are we raising kids who could storm Omaha Beach?  If we're not, we should seriously rethink our parenting.  While we should always consider whether information is age appropriate, we should try not to shelter them or teach them the world is anything other than it is.