Must a Jew Believe in God? 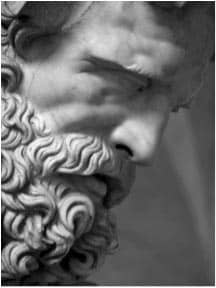 How important is belief in God? Can one be a "good Jew" without believing in God? These questions, articulated in this way, are relatively modern ones. However, while normative Judaism has always been God-centered, some thinkers -- both ancient and modern -- have conceptualized Judaism in ways that make beliefs about God less central.

From the Ancient World to Modernity

The common quip that "there were no atheists in antiquity" is more or less true. The existence of God (or gods) was taken for granted in the ancient and medieval world. Even the medieval philosophers -- Jewish, Christian, and Muslim -- who tried to prove God's existence were concerned more with displaying the rationality of religion than demonstrating the existence of a deity.

Atheism and agnosticism only emerged as real options in the modern era as consequences of secularization, the separation of church and state, and above all, the reliance on science for explanations of natural phenomena.

However, grouping all pre-modern forms of Judaism together doesn't do justice to the issue at hand. One might argue that belief in God was less central to Jews of the rabbinic era (the few centuries following the destruction of the Temple in 70 C.E.) than it was to Jews in the Middle Ages, not because God was less important, but because belief itself was. Though Jews tended to believe in certain shared concepts -- e.g., one God who led them out of Egypt, the eventual messianic redemption -- official beliefs or dogmas were not formulated until the Middle Ages.

Rabbinic Judaism demanded action -- the fulfillment of the commandments -- not the assertion of specific beliefs. Perhaps, the most striking example of this position is a commentary on the verse in Jeremiah, which states: "[They] have forsaken me and have not kept my Torah." To which the Pesikta D'Rav Kahana, a 5th- to 7th-century midrash, glosses: "If only they had forsaken me and kept my Torah."

Rabbinic Judaism, as well as biblical Judaism, has a concept of belief, but not, many would argue, in the sense of affirming propositions, e.g., asserting that God exists. Scholar Menachem Kellner, for one, points out that the biblical word emunah, "belief" or "faith," connotes trust, belief in, as opposed to the affirmation of propositions. Of course, one might argue that trusting in something implies that that something exists, but the distinction between belief in and belief that helps in understanding the priorities and emphases of the rabbinic worldview.

This approach to belief changed in the Middle Ages, when Jewish philosophers began proposing official doctrines of Judaism. Maimonides' thirteen principles of faith is the most famous list of creeds; it includes several dogmas about God, including the assertion that God exists.

Traditionally, Jewish identity had been defined biologically. According to rabbinic Judaism, if one's mother was Jewish, than one was Jewish, regardless of one's actions or beliefs.

Referring to his thirteen principles, however, Maimonides wrote: "When all these foundations are perfectly understood and believed in by a person, he enters the community of Israel, and one is obligated to love and pity him in all ways in which the Creator has commanded that one should act towards his brother." For Maimonides, one was not Jewish -- at least not fully Jewish -- if one did not believe in God and in the other tenets of belief that he outlined.

Many modern thinkers, particularly liberal theologians, have tried to reclaim the rabbinic attitude toward belief, stressing that religious dogma is anathema to Judaism and that the medieval creation of dogma was, in a sense, a corruption of Judaism. Though most of these thinkers, including Leo Baeck and Solomon Schechter, didn't use this rejection of dogma to question the existence and relevance of God, others have.

The Evolution of God: Erich Fromm

Erich Fromm, in his radical interpretation of the Hebrew Bible, You Shall Be As Gods, describes how God becomes progressively less real (and relevant) in traditional Jewish literature. At the beginning of the Bible, God is an absolute ruler who can (and does) destroy the world when He is not happy with it. In the next stage, however, God relinquishes His absolute power by making a covenant with humankind. God's power is limited because it is subject to the terms of the covenant.