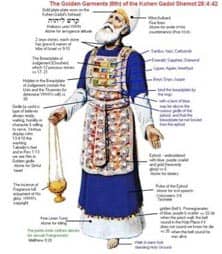 This Torah portion deals mainly with the processes and garments of the Kohanim, the priests, and the Kohen Gadol, the high priest. It starts out telling Moses to make sure he gets pure olive oil from the Children of Israel (one drash says that when referring only to the men, they say "Children" vs. "People" of Israel) for the menorah, and Aaron was charged with making sure the menorah stayed lit.

The next part of the parasha details the priestly garments that were required. It is unusual for the Torah to go into so much detail and therefore, this part of the portion is very unique. So, while serving in the sanctuary, the Kohanim wore:

The Kohen Gadol had additional accoutrements. In addition to the above, the Torah says he wore:

The last part of Tetzaveh is where G-d gives instructions about how Aaron and his four sons -- Nadav, Avihu, Elazar, and Itamar -- should be initiated into the priesthood. It is a seven-day initiation process. Also, Tetzaveh instructs them in how to make the Golden Altar on which incense was burned. These instructions are down to the cubit!

A special thanks to g-dcast.com for the weekly parasha cartoon.

In addition to the weekly Torah portion, there is a special additional reading. Since this portion immediately precedes Purim, we call this Shabbat Zachor and read parashat Zachor as well. Zachor is Deuteronomy 25:17-19, the portion in which we are commanded to remember the evil deeds of Amalek in attacking the Israelites.

The Amalekites are, in the Jewish tradition, representative of our archetypal enemy. It is a term that has been used to describe our most hated enemies, such as Adolf Hitler. At the time when we prepare ourselves to remember the seventy years between the two Holy Temples and the persecution of the Jews by Haman, it is always good to remember that even with the fun of Purim, there is still tragedy. In fact, it is said that Haman is a descendant of Amalek.

I believe it is with hope that one day soon we will receive the Third Holy Temple.