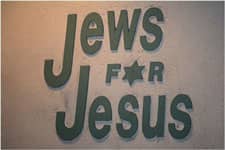 The warmed, recycled air of the plane was like a tunnel between two tundras, Misha Kapilov* reflected as he disembarked. Gone were the sights and sounds of the life he had left behind, first in Kiev, then in Israel.

Bienvenue au Canada read the sign as the frigid air pulled him into the terminal with an urgency. Passport control. Luggage. Waiting area. And there she was: Aunt Katya.* Smiling, waving vigorously, and very welcoming, she eagerly stepped forward to take her 17-year-old immigrant nephew under her wing. All Misha really knew about his father's sister was that Aunt Katya had "converted" to Christianity, but his ambiguous understanding of religion made his aunt's choice a complete non-issue.

As they drove down the broad highways of Toronto, Misha reveled in his newfound destination. The scenery was different here; the air rich with promise. The houses were beautiful and spacious. He had come to Canada to seek his fortune, and find it he would.

There was a large pot of soup waiting on the stove in Aunt Katya's modest two-bedroom apartment, and a bed turned down especially for her nephew. They sat down to eat and Misha became aware of keen eyes watching him. And then, gently but bluntly, Aunt Katya lay down the house rules. One rule, actually, stunningly simple:

"If you believe in and pray to Jesus, then you are welcome in my home," she told him.

The converse was glaringly implicit.

Misha Kapilov had a big problem. Up until now, religion had been a rather trivial chapter in his life. Russia certainly hadn't offered him anything of faith, and his brief year in Israel had only served up a large helping of hypocrisy and cynical anti-religious indoctrination. If he found Aunt Katya's terms untenable it was not because she was demanding his belief in Christianity, but because she was demanding that he believe in any God at all, a repulsive offense to Misha's self-proclaimed atheism.

But free room and board was nothing to sneeze at for an immigrant boy fresh off the boat. So he promised he'd try and, like a good little nephew, he grudgingly accompanied Aunt Katya to... synagogue.

Well, at first glance it certainly looked like a synagogue, with a rabbi cloaked in a tallit and one of those arks that housed the Torah scrolls like he blurrily remembered seeing once as a child. There were congregants with skullcaps and prayer books, and everyone wished him "Shabbat Shalom" and stayed to shmooze afterward during kiddush. Young Misha was pleasantly surprised by the warm atmosphere and the after-services get-togethers where the friendly community made him feel welcome and invited him to come back again the next week.

Misha thought it was odd how Aunt Katya, a professed Christian, permitted herself the sacrilegious practice of praying in a synagogue. But her strange practice was soon resolved when he came to understand that "Yeshua HaMashiach," abundantly referred to in the prayer texts and other parts of the "synagogue" service was none other than Jesus, father of Christianity. He was surprised and a bit aghast. After all, hadn't Papa told him that Jews didn't believe in Jesus?

It didn't take long till dear Aunt Katya threw him out of her house forever, in disappointment over his failure to "believe." But Misha continued to attend Sabbath services at Congregation Melech Yisrael on Ranee Avenue on his own ­-- if just for the sense of belonging. Very soon he became a valued member of the "synagogue." It satisfied his craving for friendship and closed the hole of loneliness. With sincere and loving persistence, Misha's fellow congregants demonstrated to him how Jews were meant to believe in Yeshua, bringing "proof" from Messianic texts. With time, the former atheist became a passionate advocate of these Jews for Jesus.

Parkdale was once populated by the wealthy upper class. Today, it has the faded look of an expensive ball gown left crumpled in a garbage bin for many years, with cats and rodents nesting in its once-delicate hems. The crumbling apartment complexes tower above the dank alleyways where pursuits of a variety of illicit activities are the norm. Crime is to Parkdale as salt is to soup; a diverse landscape of immigrants, panhandlers, and a motley group of patients released from the psychiatric hospital that closed its doors a number of years ago.

Toronto's Parkdale district was not the fortune Misha had sought. Having been exiled from Aunt Katya's, he found himself trapped in the seedy but affordable slums. Misha wanted out, and intervention from a Power he did not yet fully comprehend obliged.